A long time ago when mankind was still drawing pictures on cave walls there was a great city within which there lived the highest developed species on the planet – GNOMES.

Gnome City stretched as far as the Gnome eye could see; its sapphire towers dazzled against the clear blue sky; its golden walls glittered in the sunlight. In Gnome City there were no cars, no fax machines and no computers – all was well.

When I returned to the States and heard about Le Front de Liberation de Nains de Jardin (the Liberation Front for Garden Gnomes) — a French activist group that abducts the wee garden ornaments, repaints them in unrecognizable hues, and sets them “free” in nearby forests — I knew my former neighbor would be in a torment.

“Garden Gnomes do not prefer woods,” I could hear her tsking over a steaming cup of Earl Grey. “Otherwise, they would be Woodland Gnomes, wouldn’t they, dear?”

More recently, I heard about a German group that has taken the “emancipation” to a more ominous extreme, photographing abducted gnomes at international landmarks and sending the pictures to the gnomes’ former owners. One such photograph was taken at Mount Rushmore with the captors wearing bandits’ masks that barely hid their mirth. Copycat crimes have appeared in other regions of the gnome-loving world: Holland, Norway, Sweden, Denmark, Poland, Finland, Russia, Bulgaria, Hungary, and, here, in the United States.

“Gnome Sweet Gnome: Protecting against the threat of garden gnome theft is no small undertaking,” by Silke Tudor, sfweekly, October 18, 2000

Plastic, gaudy and above all cheap, armies of garden gnomes huddle at Polish roadsides near the German border waiting to be snapped up by bargain-hunting tourists from the west.

The gnome armies are the apogee of central European kitsch, but they also signify something far more important. The little men are seen by many in Germany as pathfinders for other Poles who will offer an avalanche of cheap produce once the country enters the European Union on May 1.

A trade war has been raging between gnome manufacturers on both sides of the border since the early 1990s when Polish entrepreneurs, bursting for opportunities after decades of communist-era restrictions, recognised that with cheap labour, low-cost materials and lack of environmental legislation they could vastly undercut the prices of German gnomes. At least five million have been sold.

“The gnomes of Warsaw are lesson for future of new Europe,” by Kate Connolly, news.telegraph, May 3, 2004

Gnome Management in the Garden

The dormant Garden Gnome Liberation Front has sprung back to life, stealing about 20 gnomes during a nighttime raid on a Paris exhibition.

“We demand … that garden gnomes are no longer ridiculed and that they be released into their natural habitat,” the Front’s Paris wing said in a statement following its weekend strike.

France’s first garden gnome exhibition in the exclusive Bagatelle park on the outskirts of the capital opened last month and has been a hit with the public as chic Parisians develop a taste for kitsch culture.
. . .
The Garden Gnome Liberation Front vanished from the public eye in 1997 after a northern French court handed its ringleader a suspended prison sentence and fined him for his part in the disappearance of around 150 gnomes.

The only suspected sighting of the organization since then was a mass suicide of gnomes at Briey in eastern France in September 1998, when 11 of them were found dangling by their necks under a bridge.

A letter found nearby said: “When you read these few words we will no longer be part of your selfish world, where we serve merely as pretty decoration.”

A secret underwater attraction that lured several divers to their deaths could have returned, police say.

The “gnome garden” complete with picket fence was removed from the bottom of Wastwater in the Lake District after several divers died a few years ago.

It is thought they spent too much time at too great a depth while searching for the site of the ornaments.

Now police divers say there is a rumour that the garden has returned at a depth beyond which they are allowed.

Pc Kenny McMahon, a member of the North West Police Underwater Search Unit, said the gnomes were well known among the diving community.

French police are trying to find homes for over 80 garden gnomes kidnapped in eastern France earlier this year.

The tiny, bearded ornaments were taken by the self-styled Gnome Liberation Front from homes in the town of Saint-Die-des-Vosges.

They resurfaced lined up on the steps of the local church one Sunday morning.

Police have never caught the culprits, but the gnomes’ owners seem strangely reluctant to come forward to claim their stolen property. 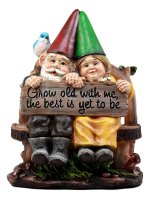 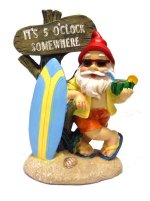 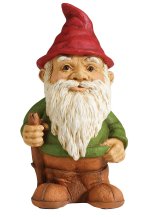 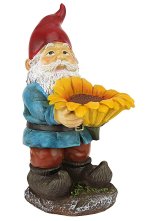