Communist crimes are less known than fascist ones. While newly released archives from the former Soviet bloc will unquestionably deepen our understanding of the Holocaust, we already have a plethora of photographic documentation, surviving physical evidence, magnificent museums and survivor testimony. By contrast, Soviet atrocities are practically ignored.

The reason is certainly not a paucity of information, as this massive work amply demonstrates. But what sets Hollander’s anthology apart from other books is less its size than its astonishing breadth. Alongside victims from the Soviet Union are East Europeans–from Albania, Bulgaria, Czechoslovakia, East Germany, Hungary, Poland, Romania and Yugoslavia–as well as their counterparts from China, Cambodia, Vietnam and North Korea in Asia, Cuba and Nicaragua in Latin America, and Ethiopia. The geographic spread does not merely overwhelm the reader: Its principal purpose is analytical. As Anne Applebaum observes in her appreciative preface, at last now “it is truly possible to understand the cross-cultural, multinational history of communism as a single phenomenon.” Readers can draw the lines of influence–ideological, financial and strategic–with greater precision than ever, “from Lenin to Stalin to Mao to Ho Chi Minh to Pol Pot, from Castro to the MPLA in Angola.”
. . .
The serious reader will want a deeper understanding of how otherwise intelligent human beings become mesmerized by utopian thinking. The hope is for a global effort to gain such understanding, especially given the treasure of archival documents Russia and its former satellites recently released. Objective, devoted scholarship in this area is critical, if for no other reason than to learn how to approach the threats of our own generation. We must achieve more sophisticated insights into the catastrophic effects of self-righteous fanaticism and the dystopias that invariably follow.

“Utopia and its Discontents,” by Juliana Geron Pilon, National Interest online, March 1, 2007, a review of “From the Gulag to the Killing Fields: Personal Accounts of Political Violence and Repression in Communist States,” Paul Hollander, editor, and “The End of Commitment: Intellectuals, Revolutionaries, and Political Morality,” by Paul Hollander. 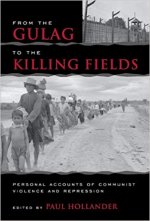 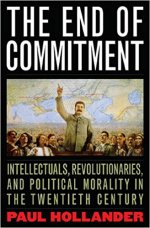