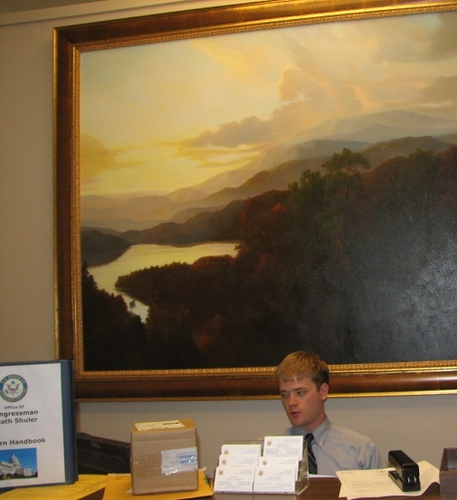 Are you contemplating a stint as a Congressional intern? Most of these internships are not paid, but the competition for them is still high. Some of the most powerful people in Washington began their careers as interns on Capitol Hill. Former Vice President Dick Cheney began his political career as an intern for Rep. William Steiger in 1969, for example.

The majority of Capitol Hill internships take place during the summer. Clare Herbert interned with Sen. Chris Dodd (D-CT) in 2008 through the Washington Ireland Program for Service and Leadership (WIP). She later started working for the WIP, mentoring future interns. In her article, “Advice for Interns Working on Capitol Hill,” Herbert suggests that interns should always wear suits to the office, even on “casual” days, although D.C. can be quite humid in the summer months. She explains her reasons for this below:

You never know where the day will take you, and I found it better to be dressed respectably enough to go anywhere. Look at it this way: If someone needs an intern to deliver a message to someone important and [you’re] in a suit while your colleagues are in flip flops, you’re gonna get picked. You work in the Senate, not an ice-cream store. Dress like it.

Herbert also stresses that you should do some research before your internship begins to become familiar with how the legislative branch works. Her suggestions include signing up for any relevant Capitol Hill newsletters (or blog feeds, such as ours), and even watching old episodes of West Wing. Another good place to start learning is TheCapitol.Net page of Research Links and Reference Tools, taking some of our Public Courses, or purchasing any of our Publications or Capitol Learning Audio Courses™. (You can read Herbert’s diary of her time working as Sen. Dodd’s intern on her Washington Ireland Program blog.)

When you begin looking for available internships, you can ask around yourself or try programs such as the one through the Washington Center for Internships and Academic Seminars, a non-profit organization that works with colleges and universities across the U.S. to provide students with internships in Washington. The Fund for American Studies (FAS) D.C. Internships website may also help lead you to some opportunities. The Fund’s District GPS blog may have some useful information once you’ve attained the internship.

An anonymous eHow contributing writer compiled a list entitled “How to Get an Internship on Capitol Hill,” which doesn’t really contain any advice beyond common sense, but does include one bit of advice you may not have considered. Congressional internships don’t happen solely in Washington; you can also apply for internships in the Congressperson’s home state office. An anonymous commenter on the same article adds, “Try to go for your Senators and Reps from your state first before choosing others, usually constituents have priority over candidates from other states.”