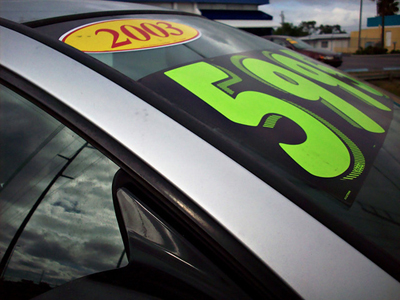 Later today, the Senate will convene and resume consideration of the conference report to accompany the Wall Street Reform and Consumer Protection Act of 2010 (H.R. 4173), intended to strengthen consumer protection in the wake of the national economic crisis. What’s noteworthy about the legislation is not just what would be included within it, but also what would be excluded.

In the bill’s original concept, car dealerships would have been monitored by the newly created Consumer Financial Protection Bureau, similar to the way banks will now be monitored. Roughly 80% of the $850 billion in current auto loans within the U.S. were brokered by the dealerships themselves, which many believed made it appropriate for the dealerships to fall under similar consumer protection laws as banks.

The dealers managed to achieve exemption from this policing, however, by being excluded from the bill. Ed Tonkin, National Automobile Dealers’ Association (NADA) chairman, said, “Dealers are not banks, and we shouldn’t be subject to bank rules.”

President Barack Obama even released a rare personal statement opposing the dealers’ efforts, saying that an exemption would allow auto dealers “to inflate rates, insert hidden fees into the fine print of paperwork, and include expensive add-ons that catch purchasers by surprise.” President Obama’s caution did not seem to sway either chamber of Congress, though.

This is one example amongst several in recent months that proves the collective lobbying clout of car dealerships. Another notable instance was when General Motors and Chrysler were pressured to reconsider the termination of 3,400 dealers as part of the court-supervised, taxpayer-financed restructuring of the two carmakers. Congress set up an arbitration process for the discussions.

Rep. John Campbell (R-CA), a member of the House of Representatives financial services committee, said, “Dealers are an effective force in Washington because all 435 of us have car dealers in our districts.” Campbell, who is also a former car dealer himself, added, “Almost every member of Congress knows a few car dealers personally.” The owners of car dealerships are often wealthy, independent businesspeople with deep economic and social ties to their communities through measures such as localized philanthropy. Those connections translate into votes.

One of the ways that the dealers have been flexing their lobbying muscle is with regular “fly-ins,” where numerous car dealers from across the country appeal to Congress via in-person visits, phone calls, emails, newspaper ads, and campaign donations. The efforts are organized by NADA, an organization that has more than 17,000 members. As Stephen Manning and Marcy Gordon wrote for the Associated Press, “Such phone calls and visits aren’t required to be reported as lobbying.”

“They’ve consistently played the lobbying angle, the campaign-finance angle and the grass-roots angle in pressuring members of Congress,” said Paul Herrnson, director of the University of Maryland’s Center for American Politics and Citizenship. “And regardless of who runs the administration… members of Congress listen to their constituents,” he continued.

Contrasting the dealers’ clout to the problems faced by Wall Street investment banks, oil companies and even Detroit carmakers in Washington, the congressional aide notes that when it comes to lobbying in the current political climate, “the closer you get to Main Street, the better you’re going to do”.

On a related note, Rep. Campbell is one of several Congress members under scrutiny by the Office of Congressional Ethics (OCE), according to The Washington Post. The OCE is investigating fundraisers held and donations received within 48 hours of the December 11 vote on the Wall Street Reform and Consumer Protection Act. The OCE will not confirm or comment on the ongoing investigation.