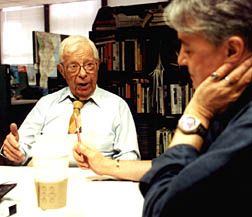 Legendary political journalist Daniel Schorr passed away on July 23 at a local D.C. hospital after a brief illness. Schorr worked in the broadcast and print journalism industry for more than 70 years and was an author of non-fiction books, including his own 2001 memoir, Staying Tuned: A Life in Journalism.

Schorr described himself as a “living history book,” and rightly so. In his career, he covered the erection of the Berlin Wall, the Marshall Plan and other reconstruction across Europe after World War II, the creation of NATO, President Lyndon B. Johnson’s Great Society programs, the launch of the USSR’s Sputnik satellite, the Cold War, and more. In 1955, he had persuaded Soviet leader Nikita S. Khrushchev to sit for his first television interview, with Face the Nation.

Schorr’s critical coverage of President Richard M. Nixon has landed him a place on the former commander-in-chief’s infamous “Enemies List.” Schorr won Emmy Awards in 1972, 1973, and 1974 for his reporting on the Watergate scandal, but he said that his presence on Nixon’s list was “a greater tribute than the Emmys list.”

As a young reporter in 1953, he caught the attention of Edward R. Murrow and became one of his handpicked protégés at CBS News, where he covered events on Capitol Hill and in the State Department for 24 years. Before his death, Schorr was the last of “Murrow’s Boys” to be alive and active in journalism.

His career at CBS was cut short after he leaked to the Village Voice a 1976 suppressed report by the House of Representatives. The report by the House Select Committee on Intelligence under Otis G. Pike (D-NY) discussed alleged illegal assassinations by the Central Intelligence Agency. Schorr was nearly jailed for contempt of Congress by refusing to name his source for the report. The House ethics committee voted 6-5 to forego a citation against him, however.

After working at CBS, he became the first employee hired by Ted Turner for the newly formed CNN, as a senior news analyst for six years. He then spent the next 25 years as a senior analyst for NPR, where he has ended his career. His last broadcast aired July 10.

In NPR’s obituary of Schorr, David Broder, political reporter and columnist for The Washington Post, said:

I think he’s unique in the sense that he’s been at the center of so many different stories, both here in Washington and overseas, for so long. He kept his perspective so well and does not ever exaggerate what’s taking place, but really let you know why it’s important.