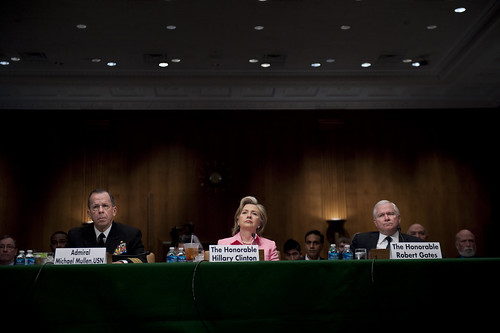 photo credit: Chairman of the Joint Chiefs of Staff

In some instances, a joint hearing might occur when the subject matter of a hearing falls under the purview of more than one committee. In this type of hearing, committee members sit together in a combined manner on the dais. Committee staff works together throughout the hearing. In essence, witnesses appear before multiple committees at once when presenting their testimony.

Some committees have also experimented with the use of

high-tech hearings. Through such methods, witnesses from practically anywhere in the world can be connected to the committee room through the use of either audio or audio and video combined. The benefits of such a remote form of hearing include the alleviation of problems associated with cost and distance. In one instance, such a hearing involved the testimony of an astronaut who was in space at the time of the hearing.

Other congressional committees have also experimented with informal formats, including round tables. The Senate Foreign Relations Committee utilizes this type of format, holding round-table discussions with committee members and witnesses, or visitors, interspersed around the table to create a more casual environment. The Senate Finance Committee also used round table discussions while preparing for the 2009 debate on health-care reform. Such informal discussions made it possible for more witnesses to participate. The lack of formalities and adherence to time limits also made it possible for more discussion and dialogue to take place between committee members and witnesses. While such round table formats have been used only on a limited basis thus far, they may well be used more frequently in the future.