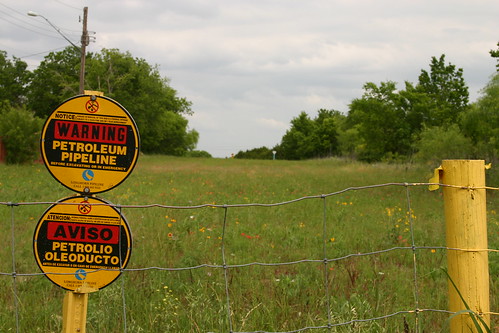 In 2008, TransCanada Corp. applied for a presidential permit from the State Department to construct and operate an oil pipeline across the U.S.-Canada border in a project known as Keystone XL. The Keystone XL pipeline would transport oil produced from oil sands in Alberta, Canada, to Gulf Coast refineries. The permit application was subjected to review by the State Department pursuant to executive branch authority over cross-border pipeline facilities as articulated in Executive Order 13337 [3-page PDF].

After several phases of review, on November 10, 2011, the State Department announced that it would seek additional information about alternative pipeline routes before it could move forward with a national interest determination. In response, several pieces of legislation were introduced, including Title V of the Temporary Payroll Tax Cut Continuation Act of 2011. Title V dictated that President must grant the Keystone XL pipeline permit within 60 days of the law’s enactment, unless the President determined that the pipeline is not in the national interest. If the President did not make a national interest determination and took no action to grant the permit, then the law provided that the permit “shall be in effect by operation of law.” The Temporary Payroll Tax Cut Continuation Act of 2011 (P.L. 112-78), including Title V addressing the Keystone XL permit, was enacted on December 23, 2011.

New legislative activity with respect to the permitting of border-crossing facilities, a subject previously handled exclusively by the executive branch, has triggered inquiries as to whether this raises constitutional issues related to the jurisdiction of the two branches over such facilities. Additionally, as states have begun to contemplate taking action with respect to the pipeline siting, some have questioned whether state siting of a pipeline is preempted by federal law. Others argue that states dictating the route of the pipeline violates the dormant Commerce Clause of the Constitution [Article I, Section 8, Clause 3] which, among other things, prohibits one state from acting to protect its own interests to the detriment of other states.

This report reviews those legal issues. First, it suggests that legislation related to cross-border facility permitting is unlikely to raise significant constitutional questions, despite the fact that such permits have traditionally been handled by the executive branch alone pursuant to its constitutional “foreign affairs” authority. Next, it observes generally that state oversight of pipeline siting decisions does not appear to violate existing federal law or the Constitution. Finally, the report suggests that State Department’s implementation of the existing authority to issue presidential permits appears to allow for judicial review of its National Environmental Policy Act determinations.