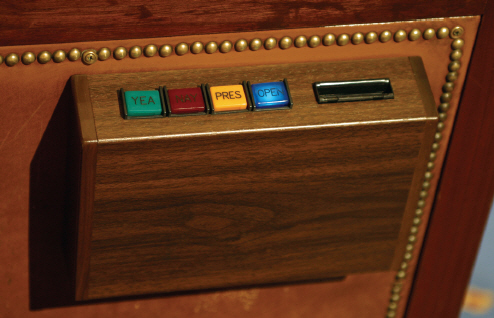 Voting terminal in the U.S. House. Image from the Clerk of the House.

A vote in the House using electronic voting machines. Members insert voting cards into one of the devices located throughout the House chamber.

Recorded and roll call votes are normally taken by electronic device, except when the Speaker orders the vote to be recorded by other methods prescribed by the Rules of the House. In addition, quorum calls are generally taken by electronic device. Each Member is provided with a personalized Vote-ID Card that can be used to vote electronically. Vote stations are positioned around the House chamber. Each vote station has a slot into which the voting card is inserted and buttons marked “yea,” “nay,” “present.” The stations have an “open” indicator, which is lit when a vote is in progress and the system is ready to accept votes. Members vote by inserting the voting card into the card slot and pressing the appropriate button to indicate the Member’s choice.

Members, if they wish, may have their votes recorded by handing a paper ballot to the tally clerk, who then records the vote electronically according to the indicated preference of the Member. The paper ballots are green for “yea,” red for “nay,” and amber for “present.” The voting system records the votes and tallies the result when the vote is completed. 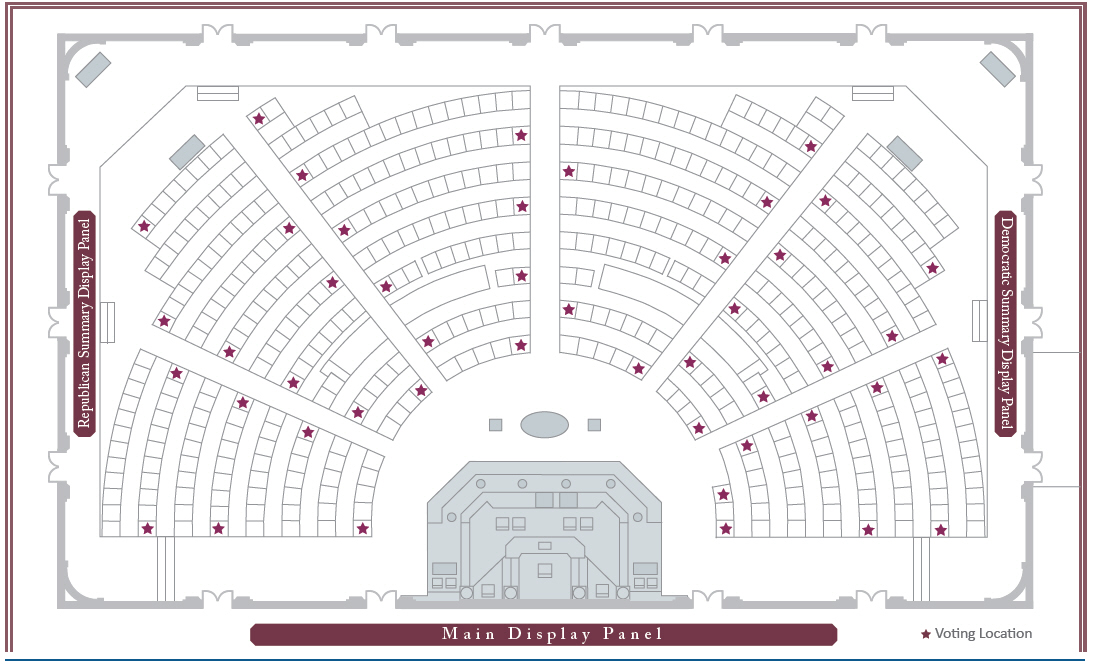 Location of Electronic Voting Stations on House floor. Image from the Clerk of the House.

Members may cast or change their votes by inserting their personal voting card into one of 46 voting machines on the House floor and pushing one of three buttons-a green button for ““yea,” a red button for “nay,” or an amber button for “present.” In addition to voting at an electronic voting station, Members may cast their votes manually in the area in front of the rostrum referred to as the “well.” To do so, Members retrieve an appropriately colored card (called a “well card”) from the table in the well. On the card, they write their name, district, and the State or territory they represent and turn it in to the standing tally clerk. The standing tally clerk verifies the identifying information, records the Roll Call number on the card, and hands it to the seated tally clerk, who enters the vote into the EVS. The current Electronic Voting System (EVS) was installed in January 2004, and it represents the fourth major upgrade of the EVS since its inception in 1972. There are 47 EVS input devices on the House floor, including a primary terminal that is located on the rostrum and controlled by the seated tally clerk. The remaining 46 voting stations are located behind various Members’ seats. Figure 2 shows a voting terminal, and figure 5 shows their locations. In addition to these input devices, there are several terminals on the House floor that allow Members and staff to view the progress of the vote and the results in real time.

There are display boards above the east and the west doors of the chamber, referred to as “electronic summary displays.” These display the time remaining in the vote and the running tally. The display board behind the Chair displays the vote of each Member.

For purposes of the vote total, although a Member may cast and change his or her vote any number of times during a record vote, each Member has only one vote-the last one cast.

In 1976, then-Speaker Carl Albert (D-OK) announced changes to the voting policy, still in effect, that allows changes at voting stations to occur only during the first 10 minutes of a 15-minute vote. To change a vote after the first 10 minutes, a Member must vote in the well by well card, unless the Member voted present, in which case that Member may change his or her vote until the voting stations are closed. During a 5-minute vote, Members may change their vote at any station throughout the duration of the vote.

A person on the floor of the House may not smoke or use a mobile electronic device that impairs decorum.