Secretary of the Senate 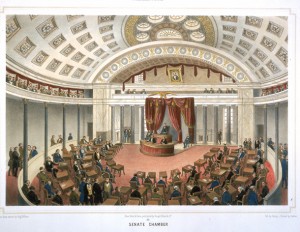 Chief administrative and budgetary officer of the Senate selected by the Senate per the Constitution (Article I, Section 3) responsible for overseeing the duties of Senate employees, educating Senate pages, administering oaths, handling the registration of lobbyists, and handling other tasks necessary for the continuing operation of the Senate. The Secretary is almost always a candidate of the majority party and the majority leader. The Secretary affirms the accuracy of bill text by signing all measures that pass the Senate. The Secretary supervises the preparation and printing of bills and reports, the publication of the Congressional Record and Senate journals, and other matters.

In a legislative role, the secretary’s office comprises the various clerks, including the official reporters of debate, who support the Senate’s legislative activities. They are present working on the dais when the Senate is in session. They also work behind the scenes processing the legislation introduced in and considered by the Senate and preparing other documents. One clerk position that exists in the Senate but not the House is the executive clerk, who prepares the Executive Journal and the Executive Calendar, recording activity on nominations, treaties, and resolutions pertaining to the Senate’s executive business.

The secretary is the Senate’s chief financial officer, responsible for accounting for all funds appropriated to the Senate and managing the disbursing office, headed by a financial clerk, which handles the Senate payroll, employee benefits, and all Senate-appropriated funds. The secretary also audits Senate financial activities, and issues the semiannual Report of the Secretary of the Senate, showing all disbursements over a six-month period.

From § 4.120, Administrative Offices of the Senate, in Congressional Deskbook.

Also see Clerk of the House.