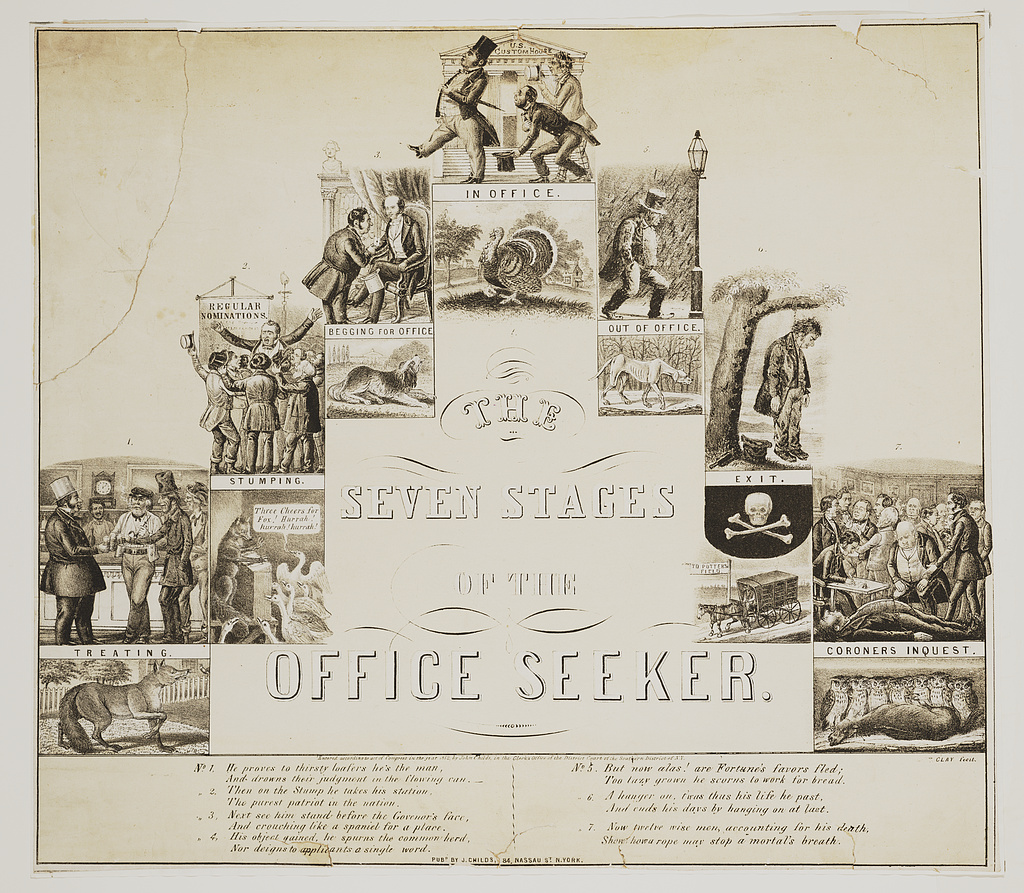 “The seven stages of the office seeker,” by Edward Williams Clay (artist) and John Childs (lithographer).

Image and text from the Library of Congress:

A satire on patronage and corruption in New York State politics, based on the medieval theme, perpetuated in American folk art, of the “life and ages of man.”

Here the seven stages are illustrated as key points in the life and career of a political hack.

At each stage the figure occupies a different step of a pyramid, under which is shown his metaphorical counterpart in the animal kingdom. According to Prof. Elizabeth Sears, the compositional device of a stepped pyramid is used in this context as early as the sixteenth century. Here, the author gives a corresponding epigram for each stage.

The artist, Edward Williams Clay, a Whig, appears to incorporate in his rendition of the theme an indictment of the patronage policies of the Democrats in New York, controlled almost continuously since 1828 by presidents loyal to that party. Former Democratic governor of New York and later president Martin Van Buren appears as “the Governor” in vignette number three, “Begging for Office.”

Under Van Buren’s administration, the Custom House, here the office seeker’s center of power, was the focus of Democratic corruption in New York City.

The seven stages proceed from left to right.

1. “Treating” – the candidate in a saloon toasts supporters. “He proves to thirsty loafers he’s the man, / And drowns their judgment in the flowing can.” Below, a fox eyes a cock on a fence.

2. “Stumping” – the candidate is surrounded by supporters, before a banner “Regular Nominations” and a weather vane crowned by a liberty cap. “Then on the Stump he takes his station, / The purest patriot in the nation.” Below, a fox at a lectern or pulpit is cheered by geese.

3. “Begging for Office” – “Next we see him stand before the Govenor’s face, / And crouching like a spaniel for a place.” A begging dog appears below.

4. “In Office” – The candidate strides past the U.S. Custom House oblivious of two supplicant gentlemen. “His object gained, he spurns the common herd, / Nor deigns to applicants a single word.” Here is portrayed a turkey in full plumage, two rural cottages beyond.

5. “Out of Office” – Hands in pockets he walks in a storm. “But now alas! are Fortune’s favors fled; / Too lazy grown he scorns to work for bread.” Below appears a scrawny dog in a barren landscape.

6. “Exit” – The office seeker hangs from a tree. “A hanger on, twas thus his life he past. / And ends his days by hanging on at last.” Below are a skull and crossbones and a carriage bound for “Potter’s Field.”

7. “Coroner’s Inquest” – “Now twelve wise men, accounting for his death, / Show how a rope may stop a mortal’s breath.” Several men in an interior ponder the unfortunate’s body. Below, a group of owls crowd around a dead horse.