Deflation: A sustained decrease in the general price level.

Deflator: An index used to adjust a current dollar amount to its real dollar counterpart, that is, to remove the effects of inflation.

Inflation: A rise in the general price level. The overall general upward price movement of goods and services in an economy.

Economists use the term “inflation” to denote an ongoing rise in the general level of prices quoted in units of money. The magnitude of inflation–the inflation rate–is usually reported as the annualized percentage growth of some broad index of money prices. With U.S. dollar prices rising, a one-dollar bill buys less each year. Inflation thus means an ongoing fall in the overall purchasing power of the monetary unit. Inflation rates vary from year to year and from currency to currency.

“Inflation,” by Lawrence White, The Concise Encyclopedia of Economics

Inflator: An index used to express a current dollar amount in prices of another period.

Real Dollar (constant dollar): A dollar value adjusted to remove the effects of inflation by dividing the nominal value (also called the current dollar value) by the appropriate price index. The resulting amount can be labeled real or inflation adjusted. Real dollar values can reflect a measure of purchasing power, such as real income, or a measure of quantity, such as real GDP. Real dollar is frequently called constant dollar when referring to measures of purchasing power. See the CPI inflation calculator.

Is the Cost of Living Really Rising?

The Consumer Price Index (CPI) program produces monthly data on changes in the prices paid by urban consumers for a representative basket of goods and services. There are separate indexes for two groups or populations of consumers: 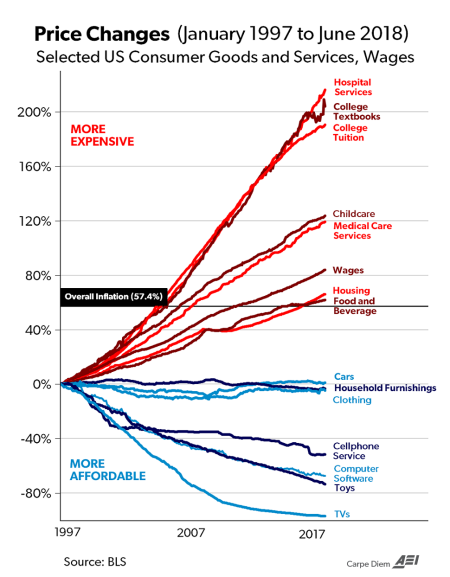 Consumer price indexes often are used to escalate or adjust payments for rents, wages, alimony, child support and other obligations that may be affected by changes in the cost of living. There is a fact sheet explaining how to use the CPI for escalating contracts.

Overview of BLS Statistics on Inflation and Prices

Why Not Print More Money?