These quotes of James Madison are from Wikiquote. More Madison quotes can be found at Notable Quotes. 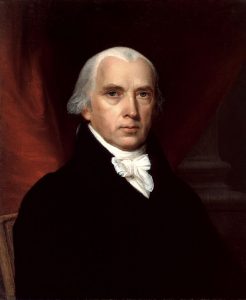 Of all the enemies to public liberty war is, perhaps, the most to be dreaded, because it comprises and develops the germ of every other. War is the parent of armies; from these proceed debts and taxes; and armies, and debts, and taxes are the known instruments for bringing the many under the domination of the few. In war, too, the discretionary power of the Executive is extended; its influence in dealing out offices, honors, and emoluments is multiplied; and all the means of seducing the minds, are added to those of subduing the force, of the people.

If Congress can apply money indefinitely to the general welfare, and are the sole and supreme judges of the general welfare, they may take the care of religion into their own hands; they may establish teachers in every State, county, and parish, and pay them out of the public Treasury; they may take into their own hands the education of children, establishing in like manner schools throughout the Union; they may undertake the regulation of all roads other than post roads. In short, every thing, from the highest object of State legislation, down to the most minute object of police, would be thrown under the power of Congress; for every object I have mentioned would admit the application of money, and might be called, if Congress pleased, provisions for the general welfare.

With respect to the words “general welfare,” I have always regarded them as qualified by the detail of powers connected with them. To take them in a literal and unlimited sense would be a metamorphosis of the Constitution into a character which there is a host of proofs was not contemplated by its creators.

We hold it for a fundamental and undeniable truth, “that Religion or the duty which we owe to our Creator and the Manner of discharging it, can be directed only by reason and conviction, not by force or violence.” The Religion then of every man must be left to the conviction and conscience of every man; and it is the right of every man to exercise it as these may dictate. This right is in its nature an unalienable right. It is unalienable; because the opinions of men, depending only on the evidence contemplated by their own minds, cannot follow the dictates of other men: It is unalienable also; because what is here a right towards men, is a duty towards the Creator. It is the duty of every man to render to the Creator such homage, and such only, as he believes to be acceptable to him. This duty is precedent both in order of time and degree of obligation, to the claims of Civil Society.

Memorial and Remonstrance Against Religious Assessments (1785)

Since the general civilization of mankind, I believe there are more instances of the abridgment of the freedom of the people by gradual and silent encroachments of those in power, than by violent and sudden usurpations; but, on a candid examination of history, we shall find that turbulence, violence, and abuse of power, by the majority trampling on the rights of the minority, have produced factions and commotions, which, in republics, have, more frequently than any other cause, produced despotism. If we go over the whole history of ancient and modern republics, we shall find their destruction to have generally resulted from those causes.

I will add, as a fifth circumstance in the situation of the House of Representatives, restraining them from oppressive measures, that they can make no law which will not have its full operation on themselves and their friends, as well as on the great mass of the society. This has always been deemed one of the strongest bonds by which human policy can connect the rulers and the people together. It creates between them that communion of interests and sympathy of sentiments, of which few governments have furnished examples; but without which every government degenerates into tyranny.

It is of great importance in a republic not only to guard the society against the oppression of its rulers, but to guard one part of the society against the injustice of the other part. Different interests necessarily exist in different classes of citizens. If a majority be united by a common interest, the rights of the minority will be insecure. There are but two methods of providing against this evil: the one by creating a will in the community independent of the majority that is, of the society itself; the other, by comprehending in the society so many separate descriptions of citizens as will render an unjust combination of a majority of the whole very improbable, if not impracticable.