Since the general civilization of mankind, I believe there are more instances of the abridgement of freedom of the people by gradual and silent encroachments by those in power than by violent and sudden usurpations.

Bobblehead of James Madison, the Father of the Constitution. 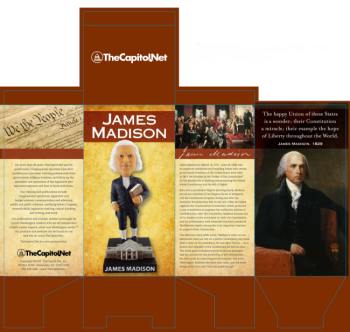 James Madison Jr. (March 16, 1751 – June 28, 1836) was an American statesman and Founding Father who served as the fourth President of the United States from 1809 to 1817. He is hailed as the “Father of the Constitution” for his pivotal role in drafting and promoting the United States Constitution and the Bill of Rights.

Born into a prominent Virginia planting family, Madison served as a member of the Virginia House of Delegates and the Continental Congress during and after the American Revolutionary War. In the late 1780s, he helped organize the Constitutional Convention, which produced a new constitution to supplant the ineffective Articles of Confederation. After the Convention, Madison became one of the leaders in the movement to ratify the Constitution, and his collaboration with Alexander Hamilton produced The Federalist Papers, among the most important treatises in support of the Constitution.

The historian Garry Wills wrote, “Madison’s claim on our admiration does not rest on a perfect consistency, any more than it rests on his presidency. He has other virtues. … As a framer and defender of the Constitution he had no peer. … The finest part of Madison’s performance as president was his concern for the preserving of the Constitution. … No man could do everything for the country—not even Washington. Madison did more than most, and did some things better than any. That was quite enough.” (James Madison: The American Presidents Series: The 4th President, 1809-1817, by Garry Wills.)