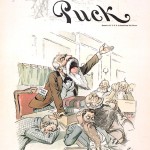 From the Congressional Glossary – Including Legislative and Budget Terms Senatorial Courtesy     Sometimes referred to as “the courtesy of the Senate,” it is a general practice – with no written rule – applied to consideration of executive nominations. Generally, it means that nominations from a state are not to be confirmed unless they … Read more