You will find that all the arguments in favor of king-craft were of this class; they always bestrode the necks of the people, not that they wanted to do it, but because the people were better off for being ridden. That is their argument, and this argument of the Judge is the same old serpent that says you work and I eat, you toil and I will enjoy the fruits of it. Turn in whatever way you will, whether it come from the mouth of a King, an excuse for enslaving the people of this country, or from the mouth of men of one race as a reason for enslaving the men of another race…

Abraham Lincoln, Speech in reply to Senator Stephen Douglas in the Lincoln-Douglas debates of the 1858 campaign for the US Senate, at Chicago, Illinois, July 10, 1858. 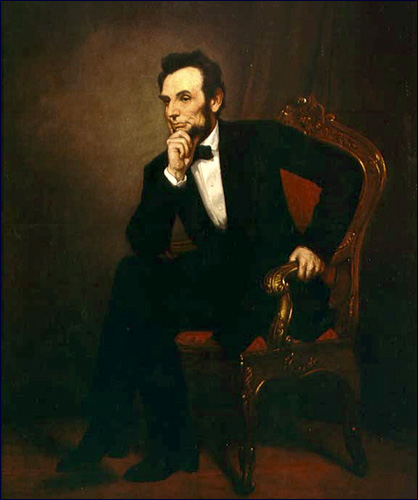 That is the real issue. That is the issue that will continue in this country when these poor tongues of Judge Douglas and myself shall be silent. It is the eternal struggle between these two principles — right and wrong — throughout the world. They are the two principles that have stood face to face from the beginning of time, and will ever continue to struggle. The one is the common right of humanity and the other the divine right of kings. It is the same principle in whatever shape it develops itself. It is the same spirit that says, ‘You work and toil and earn bread, and I’ll eat it.’ No matter in what shape it comes, whether from the mouth of a king who seeks to bestride the people of his own nation and live by the fruit of their labor, or from one race of men as an apology for enslaving another race, it is the same tyrannical principle.