Chinese Exclusion and the U.S. Congress
A Legislative History
By Martin B. Gold

Political cartoons and illustrations from various publications and sources about Chinese exclusion and American sentiment towards Chinese. Sources: HarpWeek; Guide to the Chinese in California Virtual Collection from the Online Archive of California; and Library of Congress, Prints and Photographs Online Catalog (PPOC). 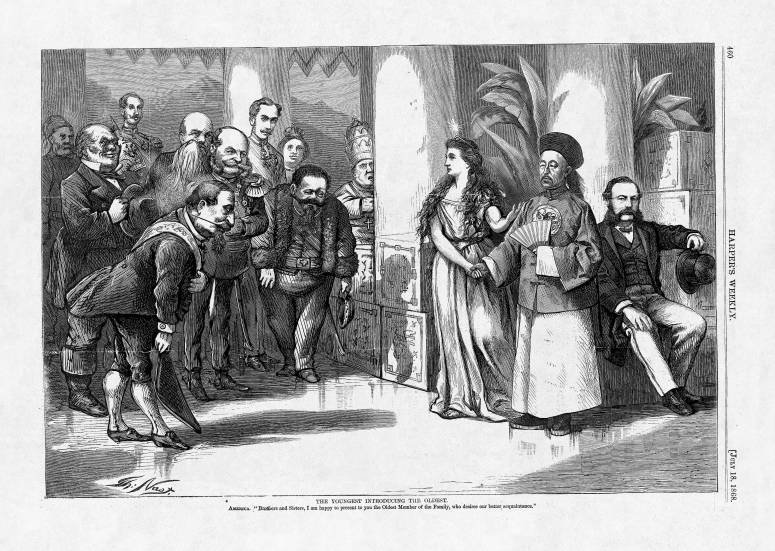 “The Youngest Introducing The Oldest” “America. ‘Brothers and Sisters, I am happy to present to you the Oldest Member of the Family, who desires our better acquaintance.'” Thomas Nast cartoon depicting Anson Burlingame‘s mission to China. Harper’s Weekly, July 18, 1868 HarpWeek (see § 9.17 and Appendix 2) 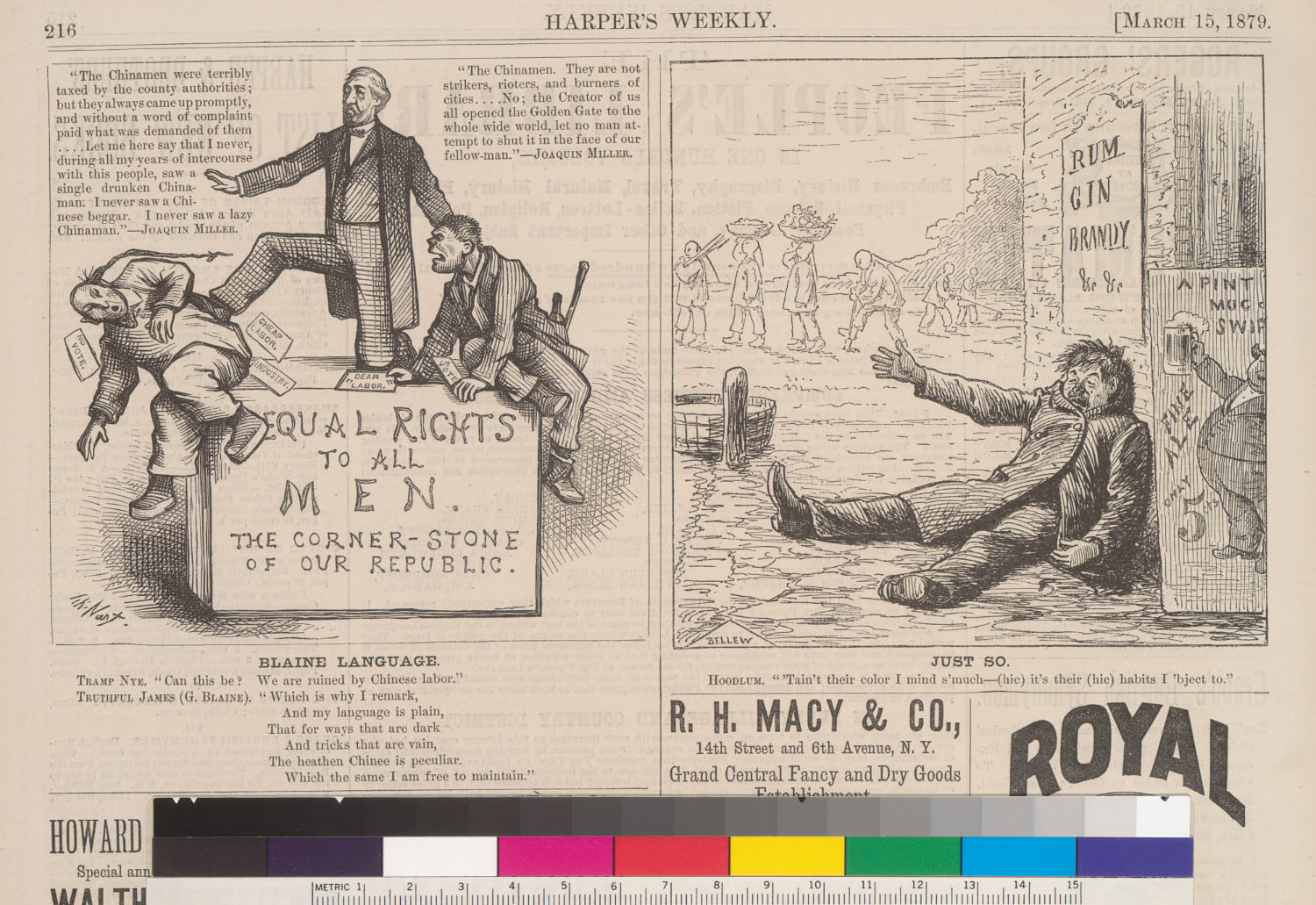 “The Chinamen were terribly taxed by the county authorities; but they always came up promptly, and without a word of complaint paid what was demanded of them….Let me here say that I never, during all my years of intercourse with this people, saw a single drunken Chinaman. I never saw a Chinese beggar. I never saw a lazy Chinaman.” – Joaquin Miller

“The Chinamen. They are not strikers, rioters, and burners of cities….No; the Creator of us all opened the Golden Gate to the whole wide world. let no man attempt to shut it in the face of our fellow-man.” – Joaquin Miller

Blaine Language.
Tramp Nye. “Can this be? We are ruined by Chinese labor.”

Truthful James (G. Blaine).
“Which is why I remark,
And my language is plain,
That for ways that are dark
And tricks that are vain,
The heathen Chinee is perculiar.
Which the same I am free to maintain.” 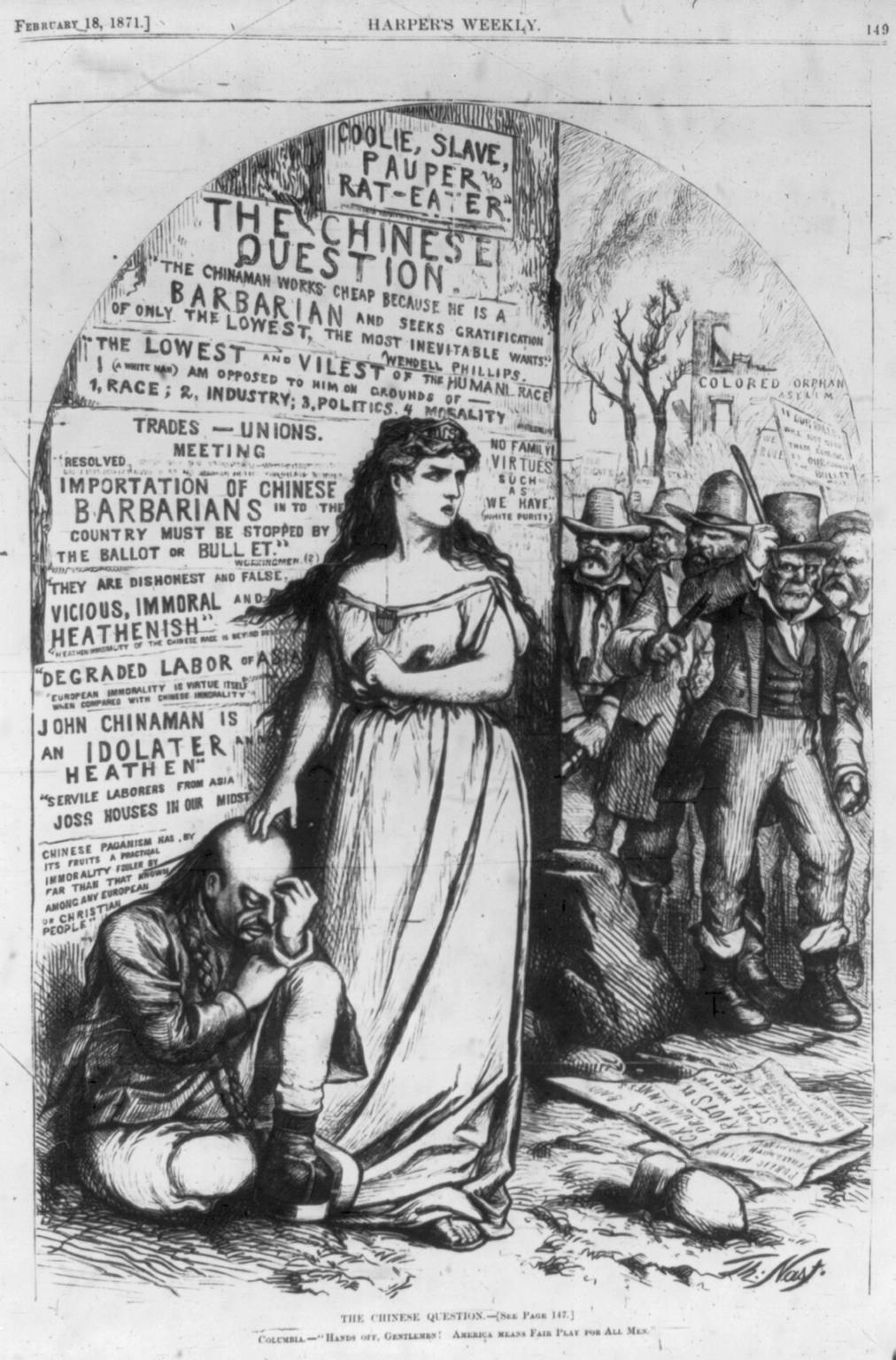 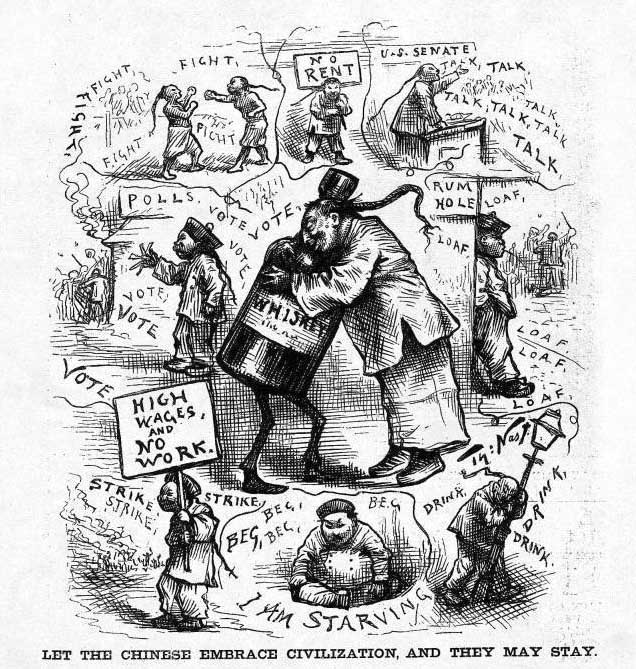 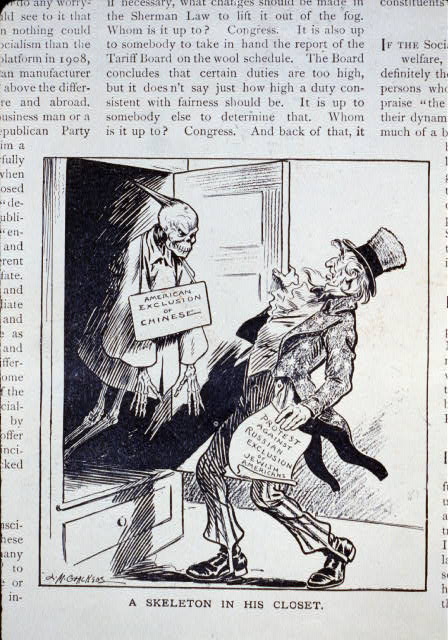 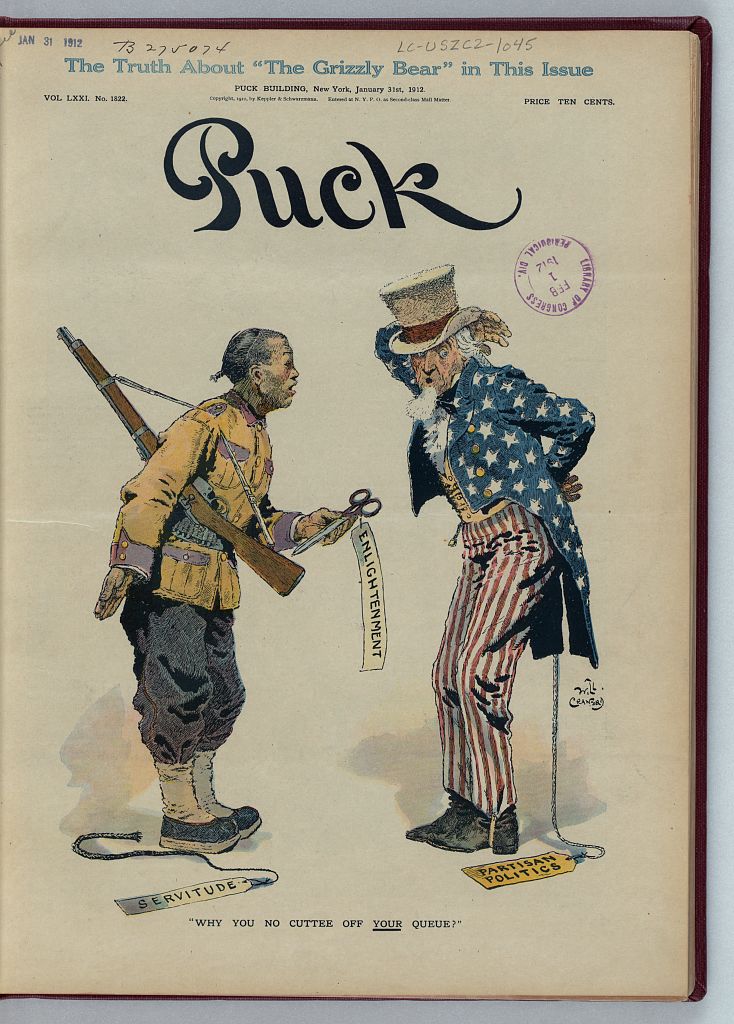 “Why you no cuttee off your queue?” Caricature by Will Crawford (1869-1944) showing Chinese soldier, with pigtail “servitude” cut off, handing Uncle Sam, who has long pigtail “partisan politics”, the scissors of “enlightenment”. Puck, January 31, 1912. Library of Congress 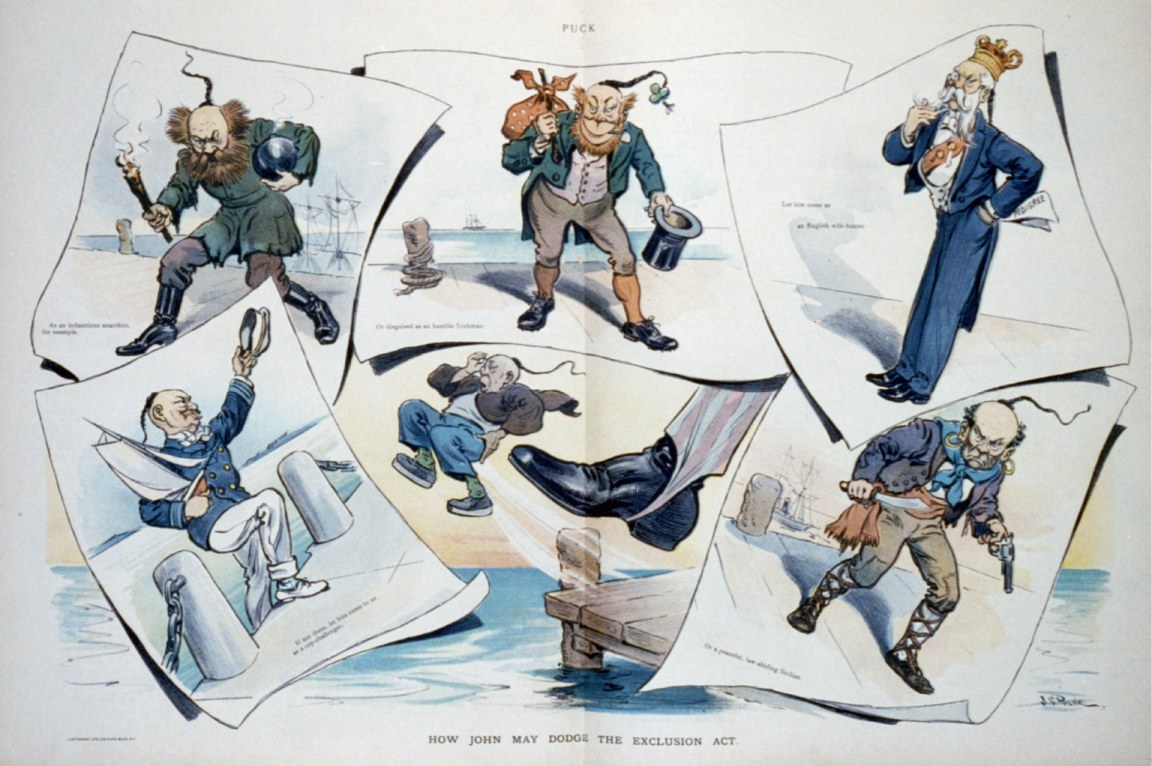 “How John may dodge the Exclusion Act.” Caricature by J.S. (John S.) Pughe (1870-1909), of immigration with 6 scenes of different ways of Chinese trying to enter the U.S.: as anarchist, Irishman, Sicilian, English wife-hunter, or yacht racer. Puck, July 12, 1905. Library of Congress 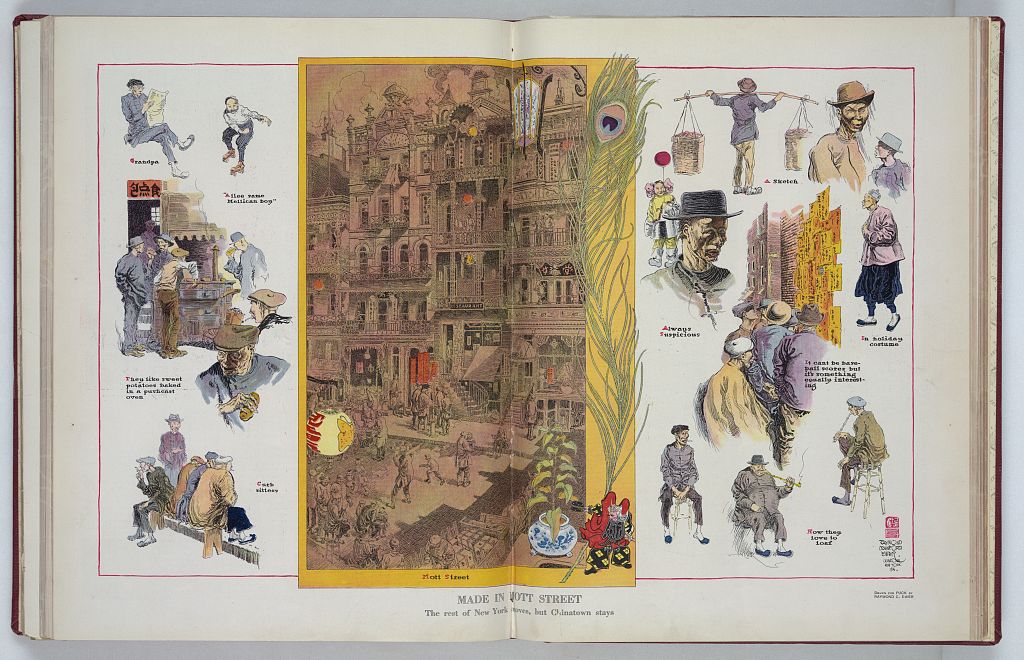 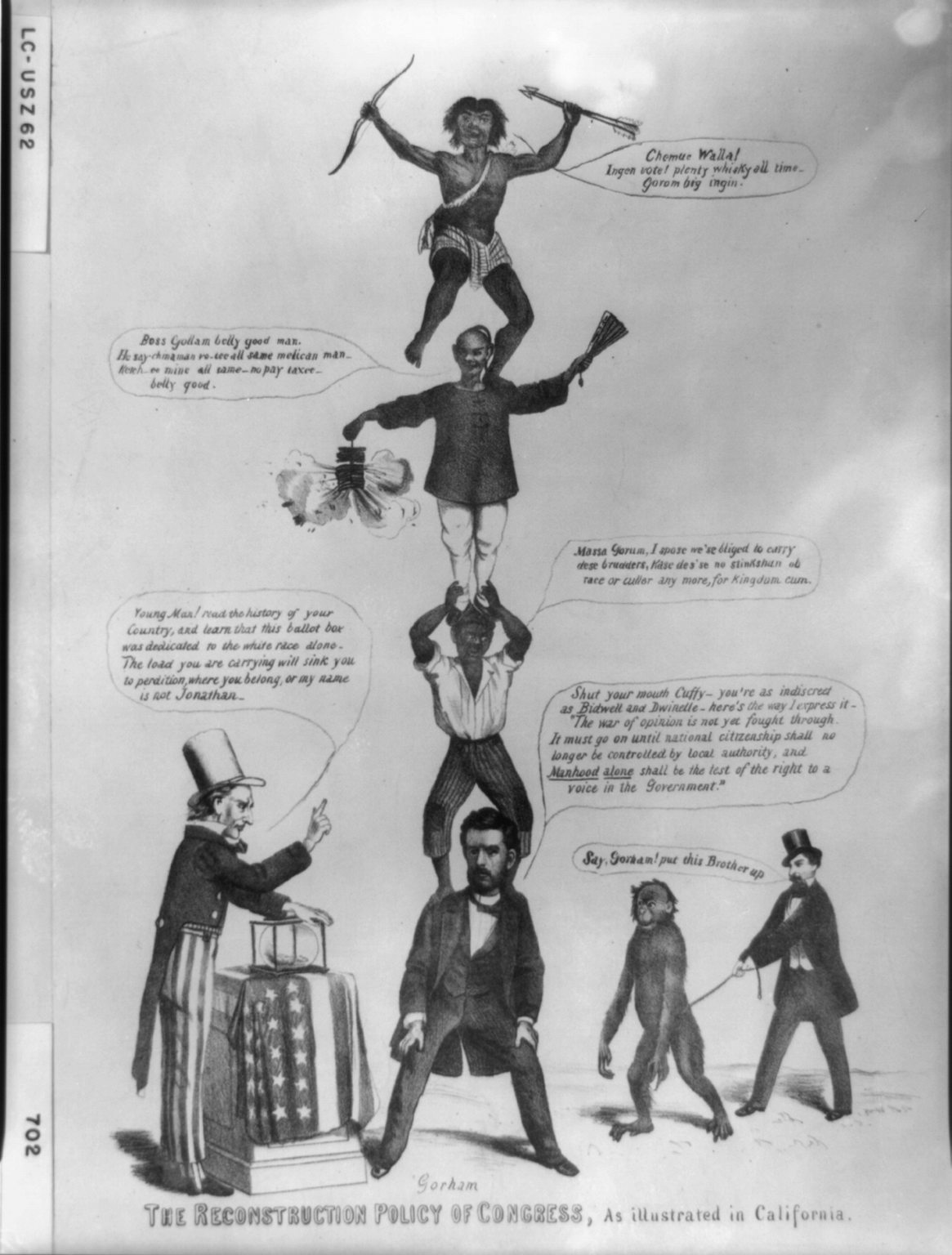 “The reconstruction policy of Congress, as illustrated in California.” 1867. A satire aimed at California Republican gubernatorial nominee George C. Gorham‘s espousal of voting rights for blacks and other minorities. Brother Jonathan (left) admonishes Gorham, “Young Man! read the history of your Country, and learn that this ballot box was dedicated to the white race alone. The load you are carrying will sink you in perdition, where you belong, or my name is not Jonathan.” He holds his hand protectively over a glass ballot box, which sits on a pedestal before him. At center stands Gorham, whose shoulders support, one atop the other, a black man, a Chinese man, and an Indian warrior. The black man complains to Gorham, “. . . I spose we’se obliged to carry dese brudders, Kase des’se no stinkshun ob race or culler any more, for Kingdom cum.” Gorham replies, “Shut your mouth Cuffy–you’re as indiscreet as Bidwell [another gubernatorial nominee] and Dwinelle–here’s the way I express it–The war of opinion is not yet fought through. It must go on until national citizenship shall no longer be controlled by local authority, and “Manhood alone” shall be the test of the right to a voice in the Government.'”Chinese man: “Boss Gollam belly good man. He say chinaman vo-tee all same me1ican man–Ketch–ee mine all same–no pay taxee–belly good.” Indian: “Chemue Walla! Ingen vote! plenty whisky all time–Gorom big ingin.” At right a man in a top hat, holding a monkey on a leash, calls out mockingly, “Say, Gorham! put this Brother up.” Library of Congress 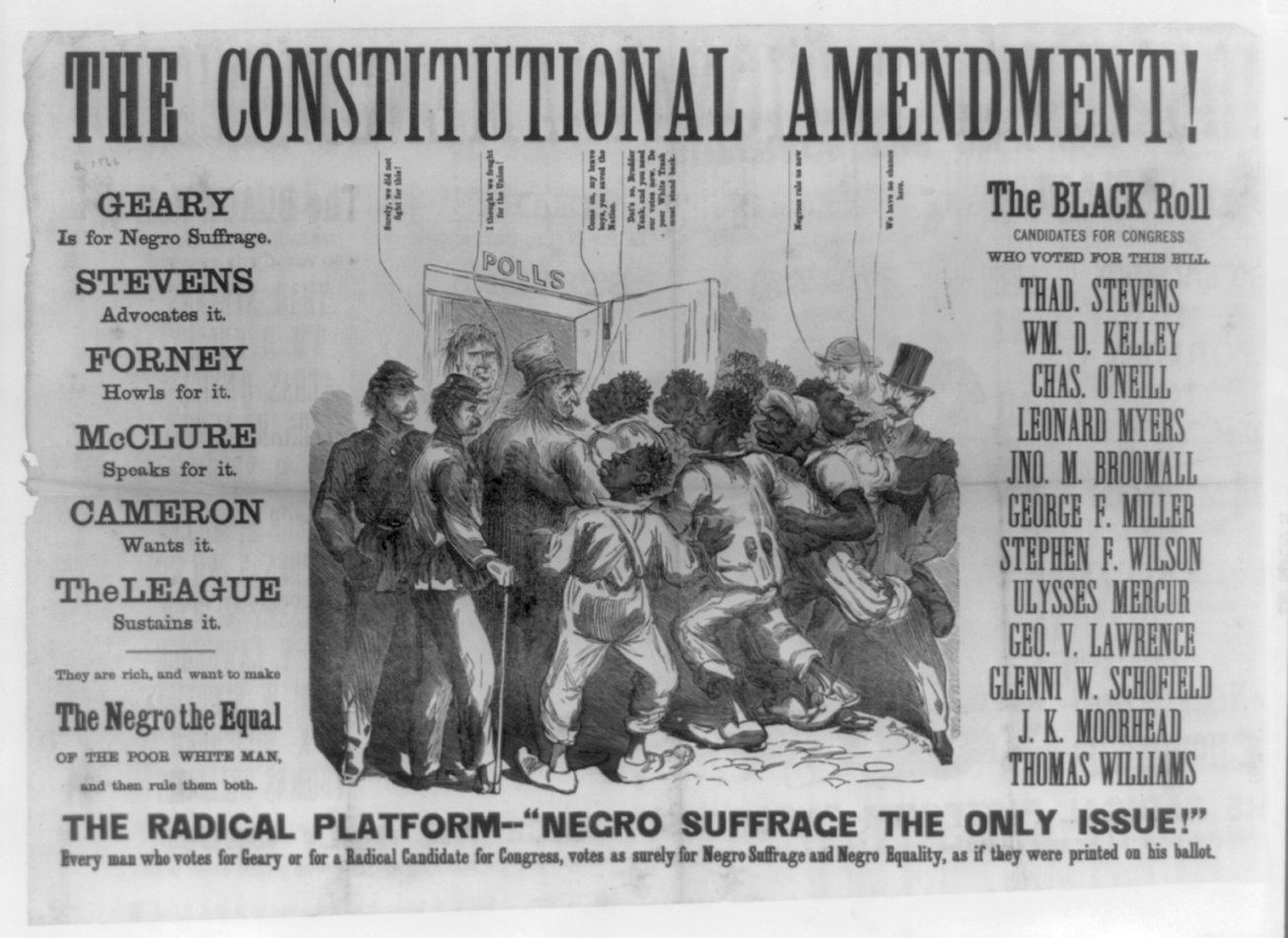 “The constitutional amendment!” 1866. One of a number of highly racist posters issued as part of a smear campaign against Pennsylvania Republican gubernatorial nominee John White Geary by supporters of Democratic candidate Hiester Clymer. Indicative of Clymer’s white-supremacy platform, the posters attack postwar Republican efforts to pass a constitutional amendment enfranchising blacks (15th Amendment). In “The Constitutional Amendment” a group of black men are shown crowding ahead of two white veterans and other whites toward a door marked “Polls.” One veteran complains, “Surely, we did not fight for this.” Another remarks, “I thought we fought for the Union.” A straggly bearded man encourages the blacks, “Come on, my brave boys, you saved the Nation.” The black response is, “Dat’s so Brudder Yank, and you need our votes now. De poor White Trash must stand back.” At right two more white men complain, “Negroes rule us now,” and “We have no chance here.” On the left is a column of text: “Geary Is for Negro Suffrage. Stevens [Pennsylvania representative Thaddeus Stevens] Advocates it. Forney [Pennsylvania senator John W. Forney] Howls for it, McClure [Alexander K. McClure, Pennsylvania Republican chairman] Speaks for it. Cameron [Pennsylvania Republican boss Simon Cameron] Wants it. The League Sustains it. They are rich, and want to make The Negro the Equal of the Poor White Man, and then rule them both.” At right are the names of candidates for Congress that supported black voting rights. Below is the commentary: “The Radical [Republican] Platform–Negro Suffrage the only Issue!’ Every man who votes for Geary or for a Radical Candidate for Congress, votes as surely for Negro Suffrage and Negro Equality, as if they were printed on his ballot.” Library of Congress (Chapter 1) 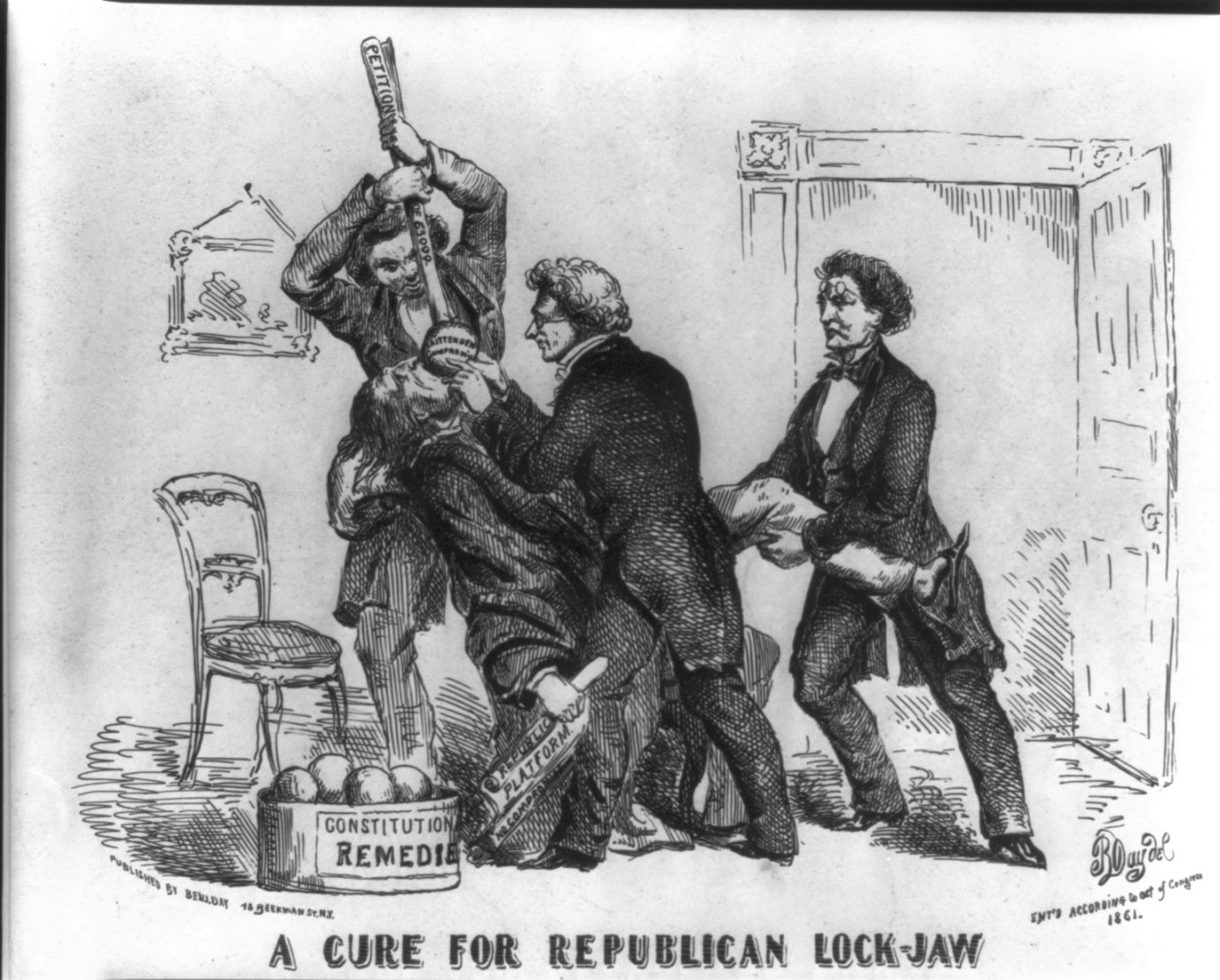 “A cure for Republican lockjaw” (Also in HarpWeek) 1861. The artist, Benjamin Henry Day (1838-1916), portrays congressional efforts to pass the Crittenden Compromise as an antidote to Republican intransigence on the slavery issue. Three well-dressed men (probably members of Congress) attend a sick man, who wears a dressing gown and holds a document inscribed “Republican Platform No Compromise.” Together they pull the invalid from his chair and struggle to force an oversized pill “Crittenden Compromise” down his throat, pushing it with a “Petition of 63,000” (“[William Henry] Seward presented two petitions signed by 63,000 inhabitants of New York city, praying for some plan of adjustment [like the Crittenden Compromise].” History of the United States: From the Compromise of 1850 to the McKinley-Bryan Campaign of 1896, Vol. III,” by James Rhodes, 1895 (reprint Cosimo 2009), page 149.) A box of “Constitutional Remedies” (containing more giant pills) is on the floor nearby. The door to the room stands open at right. At the bottom right is this text: “Ent’d According to act of Congress 1861.” Library of Congress 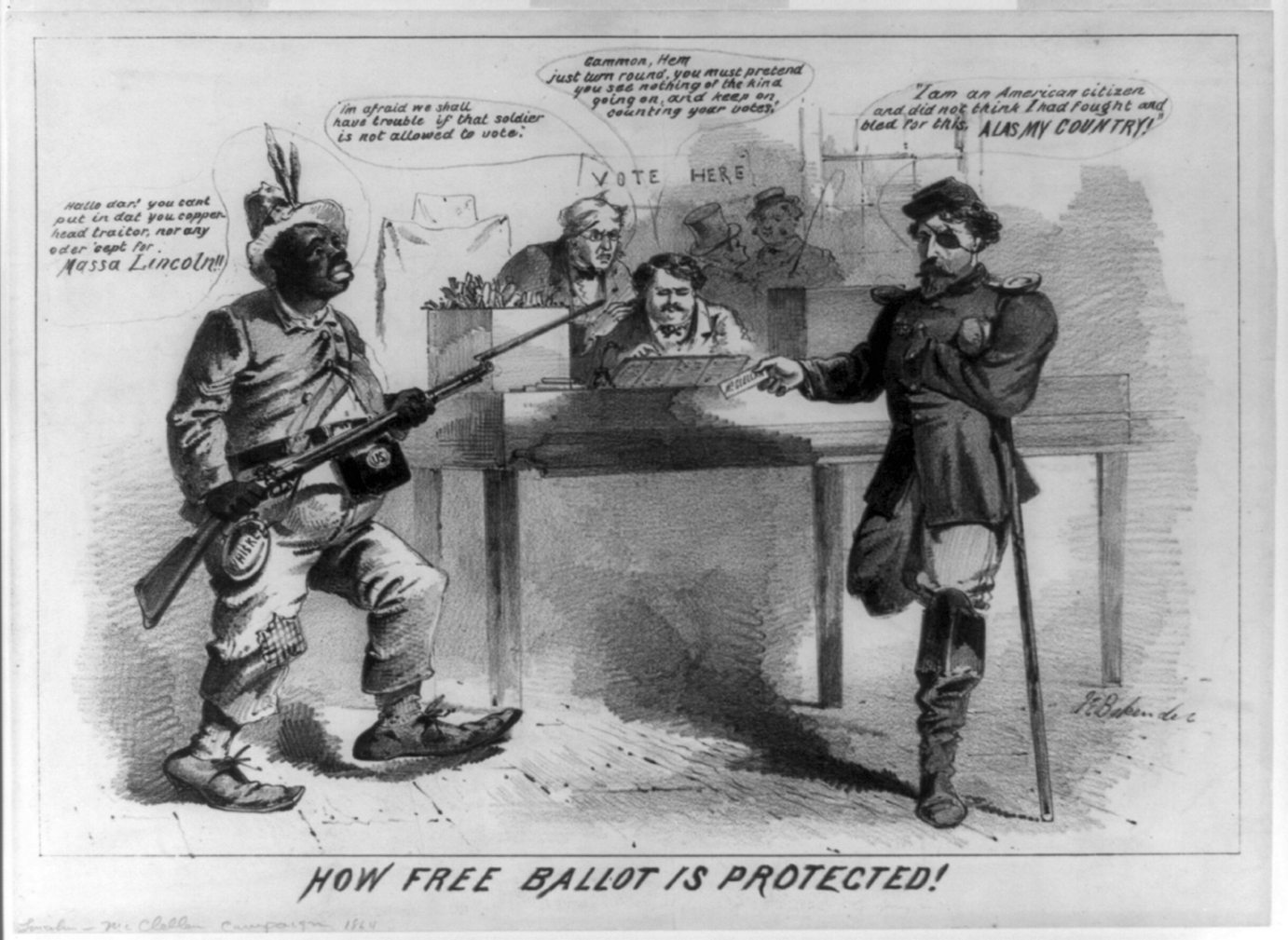 “How free ballot is protected!” 1864. The artist, Joseph E. Baker (ca. 1837-1914), charges the Republicans with electoral corruption and extremism in their efforts to defeat Democratic presidential nominee George B. McClellan. Oblique reference is also made to Abraham Lincoln‘s supposed advocacy of equal rights for blacks. A ragged black soldier points a bayonet at a maimed white Union veteran, preventing him from placing his vote for McClellan in an already stuffed ballot box. The former says, “Hallo dar! you cant put in dat you copperhead traitor, nor any oder ‘cept for Massa Lincoln!!” McClellan ran on the Peace Democrat or Copperhead ticket. The one-legged, one-armed soldier replies, “I am an American citizen and did not think I had fought and bled for this. Alas my country!” A worried election worker wearing spectacles tells his heavy-set colleague, “Im afraid we shall have trouble if that soldier is not allowed to vote.” But the second responds, “Gammon, Hem just turn round. you must pretend you see nothing of the kind going on, and keep on counting your votes.” Two townsmen converse in the background beneath a sign “Vote Here.” Library of Congress 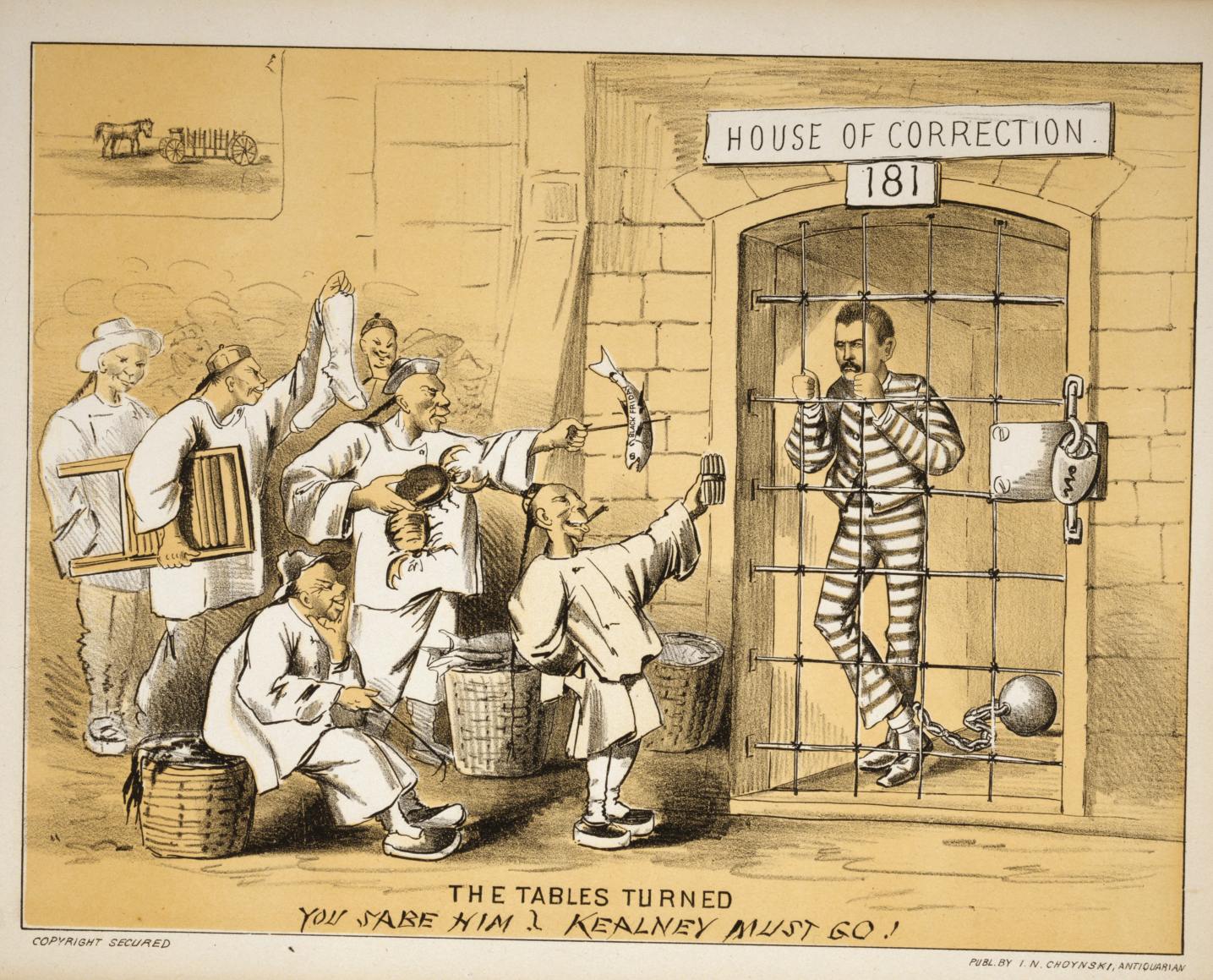 The tables turned, ca. 1877, Publ. by I.N. Choynski. Printed below title: You sabe him! Kealney must go! (You save him! Kearney must go!) Cartoon shows Chinese laundrymen and fishmongers making gifts to a man imprisoned in House of Correction cell 181. They offer socks with holes, a fish inscribed “Black Friday” (possibly referencing Black Friday 1869), crabs, and cigars. Library of Congress (See § 2.11, Dennis Kearney and the Sandlot Orators.)

Denis Kearney wears a prison uniform in this lithograph called, “The Tables Turned : You Sabe Him? Kealney Must Go!” It was published by San Francisco book producer Isadore Nathan Choynski, and dates from late 1877 or early 1878, when Kearney had been jailed for inciting a riot. The San Francisco Board of Supervisors had passed an emergency ordinance banning incendiary speech following some of Kearney’s fiery speeches.

— The Virtual Museum of the City of San Francisco

The lithograph entitled “The Tables Turned: You Sabe Him? Kealney Must Go!” was published by book producer I.N. [Isadore Nathan] Choynski in San Francisco, probably in late 1877 or early 1878. The print depicts labor leader [and “sandlot orator”] Denis Kearney behind bars in the San Francisco House of Correction, where Kearney was detained for numerous violations of a “gag law” hastily established to curb his agitation of San Francisco’s unemployed laborers. Outside the cell, a group of Chinese workers heckle Kearney, offering him the products (cigars, laundry, seafood) of their various jobs. The print’s title alludes to Kearney’s rallying slogan, “The Chinese Must Go!”, with which he often concluded his speeches. During the state’s depression years of the 1870s, the Chinese –by then a common target for scapegoating–were criticized and often persecuted by labor activists for their acceptance of low-paying jobs. The anti-Chinese sentiment of this time was so extreme as to lead to violent riots and various legal demands–many of which were met–ranging from taxing Chinese employees to expelling them from the state. 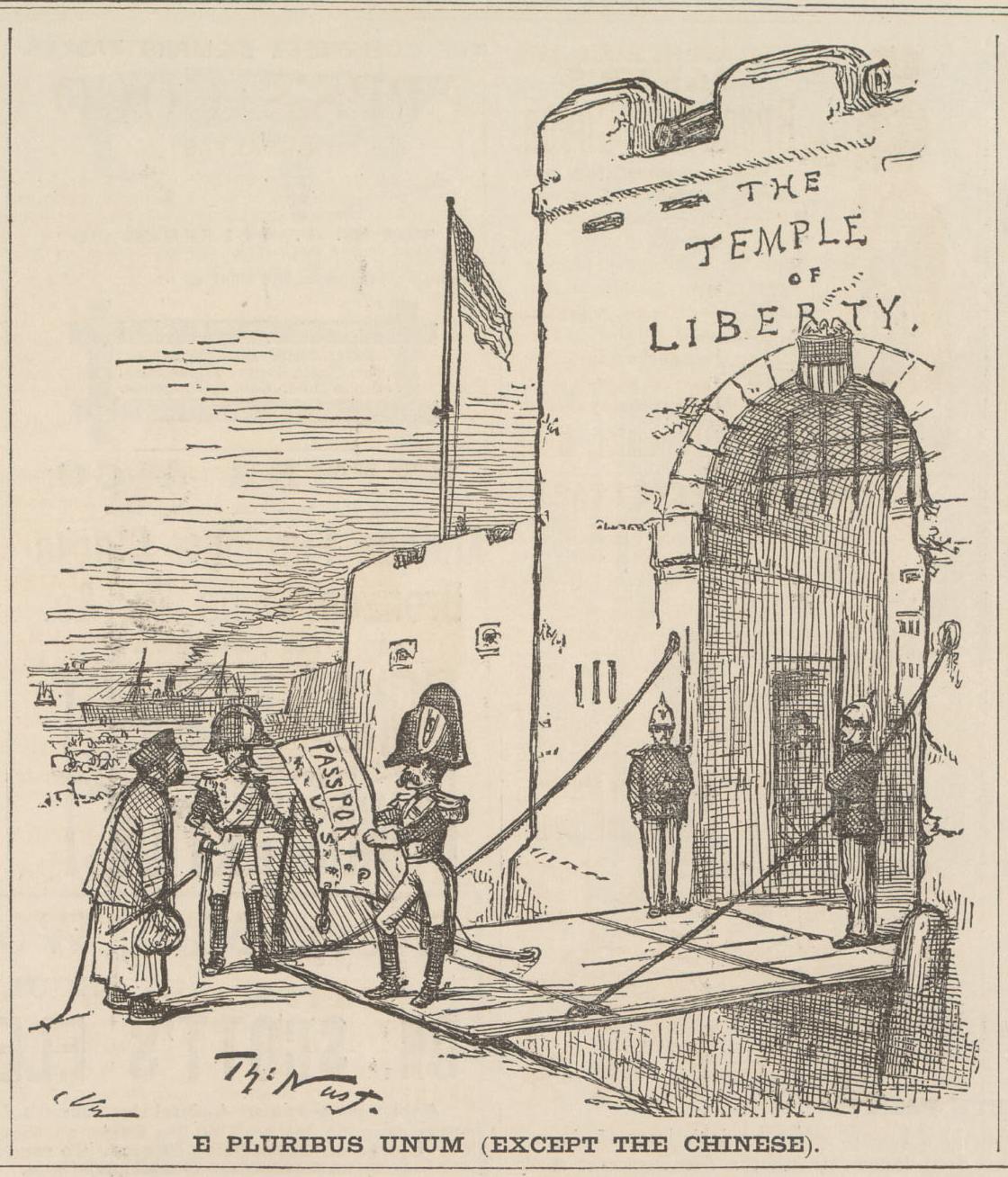 “E Pluribus Unum (Except The Chinese),” by Thomas Nast, Harper’s Weekly, April 1, 1882, page 207. A Chinese immigrant with nothing but a knapsack is having a large document labeled “PASSPORT” examined by a military officer in an exaggerated Napoleon Bonaparte-type uniform and hat before crossing a moat into “The Temple of Liberty”. (§ 4.60) 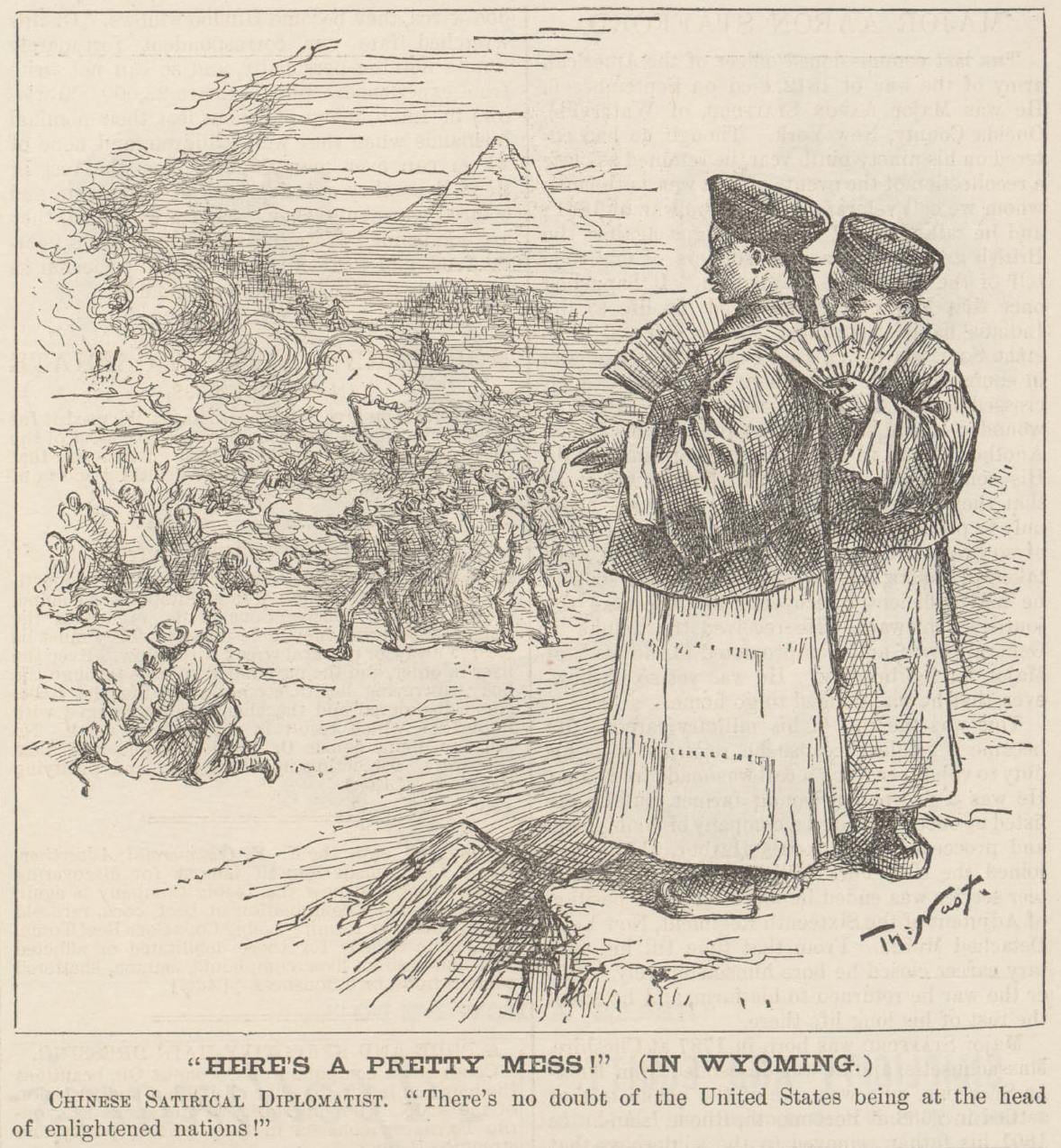 “‘Here’s A Pretty Mess!’ (In Wyoming),” by Thomas Nast, Harpers Weekly, September 19, 1885, page 623. Caption: “Chinese Satircal Diplomatist: ‘There’s no doubt of the United States being at the head of enlightened nations!'” Referencing the Rock Springs massacre in Rock Springs, Wyoming, on September 2, 1885 (see § 8.21).