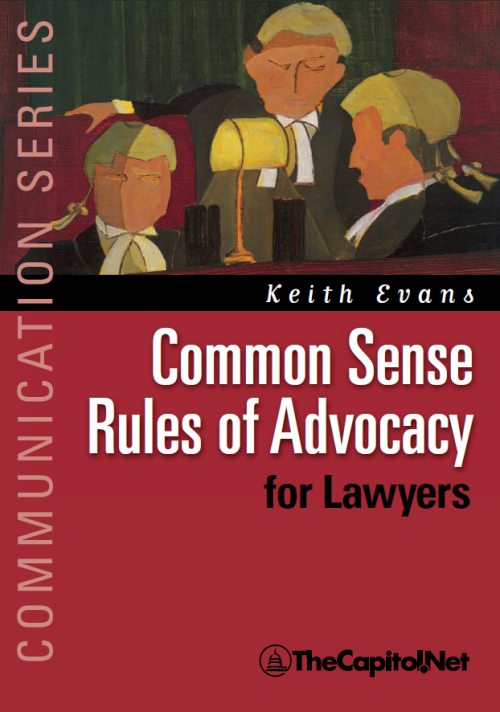 Common Sense Rules of Advocacy for Lawyers: A Practical Guide for Anyone Who Wants To Be a Better Advocate

Common Sense Rules of Advocacy for Lawyers provides tips and rules that will help anyone – lawyer or lobbyist, account executive or negotiator, parent or teacher – improve their advocacy skills in less than 10 minutes a day.

The classic advocacy guide for trial lawyers, Common Sense Rules of Advocacy for Lawyers has been hailed by attorneys, mediators and professors nationwide. It’s the practical advocacy guide designed for anyone who must persuade others including attorneys, lobbyists, negotiators, account executives, law students, sales professionals, and parents.

I wrote this book in the first place* as a kind of guidebook for young lawyers who had to do a trial in court. And I have been pleased over the years to hear from people who claimed they had won a verdict because they used one of the techniques I suggested. I have been told as well that these practical rules are as useful outside the courtroom as they are in it. And I do agree that if you have to make a presentation or negotiate a deal, these rules will undoubtedly help you.

But I don’t want to re-write the book so as to point out that this or that rule is of particular importance in any kind of negotiation or alternative dispute resolution, or that an account executive making a pitch should pay special attention to this one or that one. You are intelligent enough to see how a rule lifts out of the courtroom and can be used in negotiations and presentations, and, indeed, in every kind of relationship. My second wife complained, “I wish you’d use your advocacy on me,” and looking back on it I should have done.

And it is in the framework of a trial in court that the rules can be most easily explained. So although I have been persuaded to adopt a new title, what you are getting here is more or less the original advice for the brave young lawyers who dare to do a case in court. You’ll find it quite funny in places, and you’ll easily decide which rules you want to take with you into your daily life and into your work.

I think the central rule of this whole book is Newton’s Rule, as I have called it. “You can’t possibly convict my client on this evidence,” says the lawyer, and although the jury don’t move a muscle you can see them all thinking, “Oh no? You wanna bet?” Every action has its equal and opposite reaction, and this rule is working all the time when people are communicating or trying to communicate.

But we’ll come to Newton’s Rule, as we will to the Rule of the Honest Guide. When you’ve familiarized yourself with all the rules you’ll even find it easier to fix a date.

If a new rule occurs to you and you are willing to share it, please get in touch and tell me about it. I can be contacted through my Publisher, Chug Roberts, at TheCapitol.Net, PO Box 25706, Alexandria, VA 22313-5706 www.TheCapitol.Net, 202-678-1600, and I very much look forward to seeing this collection added to.

Here, then, apart from the occasional footnote, is the book as it was designed for the lawyers. Enjoy – as they intransitively say in California.

* This book was originally published in 1994 by West Publishing as “The Common Sense Rules of Trial Advocacy.” The Foreword, edits and updating, and Appendix 3, “How to Succeed as a Lawyer,” by Roland Boyd, are new to the 2004 edition.

Common Sense Rules of Advocacy for Lawyers is available in both hardbound and softcover editions, and as an ebook.

Chapter 2 The Dimensions of Advocacy
First Dimension: In the Common Law Countries a Trial is Not an Exercise Designed to Discover the Truth
Second Dimension: Human Beings are Far More Video Than Audio
Rule 1 You Must Dress Appropriately
Rule 2 Don’t Be Seen to Be in To Friendly a Relationship With Your Opponent
Rule 3 Don’t Smile, Laugh or Joke Without Including the Jury In
Rule 4 Appear at All Times to Be Absolutely Sincere
Rule 5 Never Convey Any Visual Signal You Do Not Intend to Convey
Rule 6 Ensure That Your Factfinder Always Has Something to Look at
Rule 7 Use All Kinds of Visual Aids
Rule 8 Maintain Eye Contact With the Factfinder
Third Dimension: People Don’t Like Lawyers!
Rule 9 Stick Rigorously to the Truth
Rule 10 Don’t Appear to Be Manipulative
Rule 11 Don’t Sound Like a Lawyer
Fourth Dimension: Time is Valuable
Rule 12 Don’t Repeat Yourself

Chapter 4 Advocacy as Theater
Rule 20 Commit to Being an Excellent Trial Lawyer Don’t Do Anything by Halves If You Can’t Dedicate Yourself to This, Move Over and Do Something Else
Rule 21 Entertain Them
Rule 22 Tell Them a Story
Rule 23 Think Beginning, Middle and End
Rule 24 Always Aim to Maintain Your Continuity
Rule 25 Keep It Simple
Rule 26 Avoid Detail
Rule 27 Work at Eliminating Everything That Can Safely Be Eliminated
Rule 28 Be Brief
Rule 29 Prepare Them for the Boring Bits
Rule 30 Know Your Audibility
Rule 31 Vary Your Pace and Vary Your Tone
Rule 32 Be Aware of Timing and Use the Power of the Pause
Rule 33 Be Vary Careful About Raising Your Voice
Rule 34 Stay Out of the Well
Rule 35 Don’t Get Too Close to the Jury Box
Rule 36 Beware of Getting Too Close to the Witness
Rule 37 Plan Your Approach to the Witness Stand

Chapter 5 The Psychology of Advocacy
Rule 38 The Materials of Advocacy Are Fragile
Rule 39 Be Likeable
Rule 40 Aim to Create Sympathy Between You and Your Factfinder
Rule 41 Newton’s Rule
Rule 42 Include the Factfinder in! or the Rule of the First Person Plural
Rule 43 Prepare Them
Rule 44 Always Aim to Be the Honest Guide
Rule 45 Don’t Ask the Factfinder to Believe the Unbelievable
Rule 46 When There Is a Weak Point in Your Case Don’t Pretend That It Isn’t a Weak Point
Rule 47 Don’t Misquote the Evidence in any Way at All and Don’t Put a Slick Interpretation on Any Part of It
Rule 48 Make Sure That You Always Come Across as Being Absolutely Fair
Rule 49 Keep Your Objections to a Minimum
Rule 50 Take Great Care Getting Your Jury Out of Court for Bench Conferences
Rule 51 Demonstrate Your Competence to Your Judge as Early as Possible
Rule 52 Practice Listening Intently
Rule 53 Stop Dead in Your Tracks as Soon as You Realize Your Sentence Has Become Too Complicated
Rule 54 There Must Be an Overall Theme to Your Entire Case and You Should Be Able to Tell the Story in One Compact Sentence
Rule 55.1 First Part: As Soon as You Have an Approximate Idea of What a New Case is About Sit Down and Write Your Closing Argument
Rule 55.2 Second Part: Sit Down and Write Your Opponent’s Closing Argument
Rule 55.3 Third Part: Sit Down and Perfect Your Closing Argument
Rule 56 Show Them the Way Home

Chapter 7 Direct Examination
The Rule About Leading Questions
Rule 67 The Foundation Rule: Before You May Ask a Witness to Testify on any Topic, You Must Lay a Foundation Showing How the Witness Has Acquired Knowledge of That Topic
Rule 68 In Direct Examination, Remember the Rule of Two and Couple Your Questions Wherever You Can
Getting Documents into Evidence
Refreshing Recollection

Chapter 8 Cross-Examination
Rule 28 Be as Brief as You Can Be
Rule 69 Stop When You Get What You Want
Rule 70 Use Leading Questions in Cross-Examination
Rule 71 Pin Down the Witness: Don’t Spring the Trap Until the Witness is Inside
Rule 72 Keep the Record as Favorable to You as Possible by Moving to Strike Any Inadmissible Evidence
Rule 73 Ride the Bumps: Keep Your Dismay a Secret
Rule 74 The Minefield Rule: Never Jump Back in Alarm!
Rule 75 Don’t Cross-Examine at All Unless You Have to
Rule 76 Don’t Go Fishing
Rule 77 Don’t Ask Questions to Which You Don’t Know the Answer
Rule 78 Never Ask “Why?” and Never Ask “How?”
Rule 79 Don’t Open the Door
Rule 80 Don’t Let the Witness Repeat Her Direct Testimony
Rule 81 Don’t Ever Get Into an Argument With a Witness
Rule 82 Don’t Ask the Fatal Final Question

Chapter 9 Re-Direct Examination
Salvage, Clarification, and Massacre
Rule 83 If You Don’t Do Re-Direct Well It’s Better You Don’t Do It at All
Re-Direct Must Be Done Confidently and Effortlessly

Chapter 10 The Final Argument
Rule 84 It’s The Factfinder’s Emotion, Not Yours, That Matters
Rule 85 Emotion Follows Facts and Not the Other Way Around
Rule 86 Too Little Emotion is Fatal: Too Much Emotion is Fatal
Rule 87 Acknowledge the Feelings That Have Understandably Been Stirred Up

Appendices
Appendix 1: Why Color Is Critical
Appendix 2: The Practical Rules at a Glance
Appendix 3: “How to Succeed as a Lawyer,” by Roland Boyd