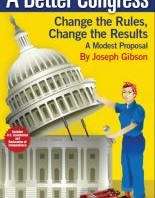 Endnotes
A Better Congress: Change the Rules, Change the Results: A Modest Proposal, by Joseph Gibson

1. “41% Say Random Selection From Phone Book Would Do A Better Job Than Current Congress,” Rasmussen Reports poll published May 20, 2010

3. “75% Say Congress Should Cut Its Own Pay Until Budget is Balanced,” Rasmussen Reports poll published, August 31, 2010

6. For a discussion of the Founders’ thinking about these incentives, see Federalist Papers Nos. 52–66 (The Legislative Branch).

7. U.S. Const., art. V. Constitutional amendments generally require the concurrence of two-thirds of both chambers of Congress and ratification by three-fourths of the states.

Ch. 1 – The Fortress of Incumbency

9 “Fairness of Elections: 55% Say Most in Congress Reelected Because the Rules Are Rigged,” Rasmussen Reports poll published September 21, 2010

14. This book uses the term “organized interests” rather than “special interests.” So-called “special interests” are not special. They are simply groups of citizens trying to get their way in the legislative process. They are neither worse nor better than other citizens. What distinguishes them is that they have organized a united effort to accomplish their goals. For more on the nature of organized interest groups, see Joseph Gibson, Persuading Congress, Chapter 12, Interest Groups and Lobbyists (2010) (hereafter “Persuading Congress“) and Deanna Gelak, Lobbying and Advocacy, § 1.4 What Are Special Interests? (2008) (hereafter “Lobbying and Advocacy“).

16. In 2010, campaign contributions from individuals were limited to $2,400 per election as well. For purposes of these restrictions, primaries and general elections are treated as separate elections. For more on compliance with election laws, see the website of the Federal Election Commission, “Help with Reporting and Compliance,” at: <http://fec.gov/info/compliance.shtml> and Congressional Deskbook, §§2.10, 2.20.

17. The individual limitation has the same effect as the limitation on PAC contributions. This book generally refers only to the PAC limitation to simplify the discussion. See “Quick Answers to PAC Questions” from the FEC.

19. For more on the financial pressures of congressional campaigns, see Lobbying and Advocacy, § 2.25 The Financial Pressures of Political Campaigns.

23. In 2010, several Senate candidates who unexpectedly lost primaries contemplated write-in campaigns in the general election. Only one, Senator Lisa Murkowski of Alaska, actually launched such an effort. For more on write-in campaigns, see Write-in candidate (Wikipedia), and YouCanWriteIn.com.

Chapter 2 – The Ordeal of a Campaign

25. For more on the kinds of people who run for Congress, see Persuading Congress, Chapter 3, Members of Congress.

27. For more on how candidates can use these tools, see Media Relations Handbook, by Brad Fitch, Chapter 6, Web-Based and Online Communications (2004).

29. For more on the role of congressional staff, see Persuading Congress, Chapter 6.

31. To engage in extended debate in an effort to kill a bill is known as a “filibuster.” See Congressional Deskbook, §8.210 Consideration and Debate on the Senate Floor.

32. When sixty Senators vote to cut off debate, the Senate is said to have “invoked cloture.” See Congressional Deskbook, §8.231 Steps to Invoke Cloture.

33. In parliamentary parlance, an amendment that relates to the same subject matter as the underlying bill is said to be “germane” to the bill. Generally speaking, in the House, amendments must be germane. In the Senate, amendments need not be germane except in very limited circumstances.

36. For more on procedures for reconciling differences between the House and the Senate, see Congressional Deskbook, §§ 8.260-8.280


Chapter 6 – The Drive for Reelection


Chapter 8 – Crisis: An Opportunity to Waste

41. For more on the crisis mentality in Congress, see Persuading Congress, Chapter 40, Crisis.

46. On October 12, 2010, the Administration lifted the moratorium, but the oil industry expressed concern that it might be continued as a practical matter because of permitting delays. See “API Pleased with Moratorium Lift, But Concerned about De Facto Ban,” American Petroleum Institute press release, October 12, 2010.

More broadly, both parties and all congressional committees fall victim to the urge to legislate before all the facts are in about a perceived crisis. The House Energy and Commerce Committee just happens to have provided two good recent examples. With regard to the long term damage of the drilling moratorium, see Chapter 18 below.

49. See 123 Stat. at 208. At the time, this provision caused controversy because critics charged that despite the facial neutrality of the language, Senate Majority Leader Harry Reid of Nevada inserted the provision to fund a Las Vegas to Los Angeles high speed train. Whatever the merits of that charge, it is beside the point here.

50.  Reports from the Board of Trustees – Summary of the latest reports for the Social Security and Medicare programs.

53. Former House Ways and Means Chairman Rep. Dan Rostenkowski being chased to his car by senior citizens angry over another Medicare reform: “‘Buried In The Archives,’ The Original Town-Hall Battle,” CBS News, August 10, 2009.


Part II. How to Fix Congress

But the absolute numbers are somewhat misleading.


George Washington was paid a salary of $25,000 a year from 1789 to 1797 as the first president of the United States. The current salary of the president has recently been doubled to $400,000, to go with a $50,000 expense account, a generous pension and several other benefits. Has the remuneration improved?

Making a comparison using the CPI for 1790 shows that $25,000 corresponds to over $585,000 today, so the recent raise means current presidents have an equal command over consumer goods as the Father of the Country.

When comparing Washington’s salary to an unskilled worker, or the measure of average income, GDP per capita, then the comparable numbers are $11 and $24 million. Granted that would not put him in the ranks of the top 25 executives today that make over $200 million. It would, however, be many times more than any elected official in this country is paid today. Finally, to show the “economic power” of his wage, we see that his salary as a share of GDP would rank him equivalent to $1.8 billion.

58.  The facts, including the “bribe menu,” are described in the Justice Department’s Sentencing Memo available at:

63.  The author spent more than a decade of his life as a congressional staffer, and the argument here and in the next chapter, Chapter 13, is not a criticism of congressional staffers. The vast majority are dedicated public servants who toil away in obscurity for less money than they could make in the private sector. Rather, the concern is that their sheer numbers insulate members from reality and enable them to delve into more subjects than they can reasonably handle. See Committee on House Administration, Member’s Handbook, Section 3: Staff; and “Legislative Branch Staffing, 1954-2007,” by R. Eric Petersen, CRS Report for Congress R40056, October 15, 2008 (16-page PDF

67.  “I love these members that get up and say, ‘Read the bill!’ Well, what good is reading the bill if it’s a thousand pages and you don’t have two days and two lawyers to find out what it means after you’ve read the bill?” Rep. John Conyers, Jr., on reading the 2010 health care reform bill. Video: “John Conyers on Reading the Healthcare Bill.”

69. House Speaker Nancy Pelosi: “But we have to pass the bill so that you can find out what is in it, away from the fog of the controversy.” Press Release: “Pelosi Remarks at the 2010 Legislative Conference for National Association of Counties,” March 9, 2010. (Also available as 3-page PDF

70. These figures do not include joint resolutions, concurrent resolutions, or simple resolutions. For more on these types of legislation, see Congressional Deskbook, §§ 11.20, 11.30. For an explanation of how these numbers were derived, see Appendix A.


Chapter 16 – The Committee on Repeals

78. Sometimes Congress appropriates funds for a particular purpose and then they are not spent for one reason or another. This money then stays in the agency and is often spent for some other purpose with the approval of the congressional appropriators. The money is known as an unobligated balance and the process is known as reprogramming. For more on these matters, see Congressional Deskbook, § 9.140 Transfer and Reprogramming.

81. For more on how bills are referred to committees in the House and Senate, see Congressional Deskbook, § 8.30 Referral of Legislation to Committee.


B. Solutions Specific to the Senate

85. For more on how the Founders viewed the role of the Senate, see Federalist Papers No. 63.

86. See Rule XXII, Paragraph 2, Rules of the United States Senate. During 2010, the Senate Rules Committee held a series of hearings to examine the filibuster and related rules and practices. These hearings are available at: http://rules.senate.gov/public/index.cfm?p=CommitteeHearings.

89. Just after each presidential election, Congress publishes a document entitled “United States Government Policy and Supporting Positions” that enumerates the various non-civil service jobs in the executive branch. This document is commonly known as the Plum Book, both because of the color of its cover and its contents. The most recent version is available online at: <www.gpoaccess.gov/plumbook/>.

90. For more information on the federal judiciary, see the website of the Federal Judicial Center, <www.fjc.gov>.

91. For example, the 200-page questionnaire filled out by Supreme Court Justice Elena Kagan can be viewed on Scribd: ElenaKagan-PublicQuestionnaire.

95. In the debates over ratification of the Constitution, the Founders did not seem to contemplate the possibility of the interminable delays inherent in today’s confirmation process. See Federalist Papers No. 76. They seemed to think that the threat to the President’s nominees would be defeat in a confirmation vote – not death by never having a vote.


C. Solutions Specific to the House

99. See the website of the Clerk of the House for more detailed information on this growth: <http://clerk.house.gov/art_history/house_history/congApp/>. Interestingly, during the debates on the Constitution, there was great concern that Congress would not increase the number of representatives as the population increased. See Federalist Papers Nos. 55, 56, and 58.

106. The United States Census Bureau projects that minorities will make up a majority of the U.S. population by 2042. “An Older and More Diverse Nation by Midcentury,” Press Release, U.S. Census Bureau, August 14, 2008.