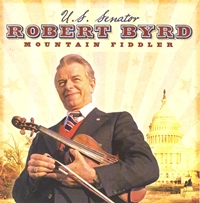 A Virginia-based record label, County Records, is reissuing
Mountain Fiddler, a bluegrass album by former Senator Robert Byrd (D-WV), who passed away late last month at the age of 92.  Sen. Byrd was the longest-serving member of the U.S. Senate in history, at 58 years.

Byrd was a self-taught fiddle player, heavily influenced by legendary West Virginia fiddler Clark Kessinger. Calling himself Fiddlin’ Robert Byrd, he often played on the campaign trail to stand out from other candidates.

While serving as Senate Majority Leader in 1977, Byrd recorded Mountain Fiddler in his Capitol Hill office. It was released in 1978 and contained a collection of folk songs, string-band standards, and fiddle classics, with some of the songs prefaced by anecdotes. Byrd was backed by members of the renowned bluegrass group The Country Gentlemen: Doyle Lawson on guitar, James Bailey on banjo, and Spider Gilliam on bass.

Adam Sheets, a contributor to the Americana and roots music magazine No Depression‘s website, reviews the album thusly:

Honestly, I wasn’t expecting much from the record. […] Then I read the liner notes and discovered that not only was it produced by Barry Poss, who would found Sugar Hill Records a year later (and apparently wanted to record Byrd after hearing some recordings he had made for the Library of Congress), but featured accompaniment from three members of The Country Gentlemen[…] Byrd proves to be quite accomplished as a fiddler (great accompaniment never hurts) and also displays a good, if undeveloped, full-throated Appalachian singing voice. […] This album is well worth checking out.

Diane Amov, contributing writer to Suite 101, adds that “Sen. Byrd proves to be an affecting vocalist […] with a high tenor voice and true mountain style.”

The reissued album will be available nationally on July 27. The complete track listing includes:

We’ve embedded a couple of videos below that feature Sen. Byrd performing. You can check out a larger collection of YouTube videos at the West Virginia Byrd website.