If you thought the real estate market was bad, just wait until you can’t get title insurance. This mess is making the Torrens Title system look better by the minute. 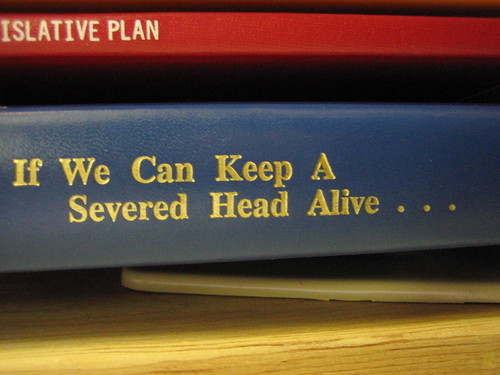 6. Selling REOs & Foreclosed Properties: Relative to the economy, here is the greatest concern: Banks are sitting on millions of foreclosed properties. Given their mishandling of foreclosures, there are now credible concerns that Title companies will not insure new REO transactions due to the banks’ administrative negligence. Without Title insurance, these houses are worth from 25-50% less than they would have otherwise sold for at REO sale or auctions. If this affects a million REOs times even $100k, that is a lot of money. And, it is potentially much worse.

The Impact of Error From Securitization to Foreclosure, by Barry Ritholtz, The Big Picture, October 15, 2010,

Not looking good at all.

I believe this is the first time a major media outlet has discussed the issue of the failure to convey notes (the borrower’s IOU) through the conveyance chain (usually four parties in total, although it can be more) as described in the contract governing these deals, the pooling and servicing agreement.

The Times has a completely different sort of account, with a headline that is remarkably blunt: “Avoid Foreclosure Market Until the Dust Settles.” This is the sort of article that gives industry lobbyists nightmares. And with good reason. It contains a horror story that is enough to scare lots of people who are thinking of buying properties out of foreclosure.

Just as the account of a man who had his house foreclosed upon when he has no mortgage persuade a lot of people that there could be real problems with foreclosures, this one illustrates how title has become a mess.

Todd Phelps and Paul Whitehead bought at a foreclosure auction. It turns out the lender who had seized the house was the second mortgage-holder; unbeknownst to them, the property had a large first mortgage outstanding, which meant it was now their obligation.

Lots of homeowners are certainly hoping it doesn’t “get that far”:

Folks hoping that now the banks finally get what’s coming to them should be mindful of the fact that if we decide there’s no clear title on houses with existing mortgages, that probably means you can’t sell your home, either.

But I doubt it will ever get that far; either courts will find a way to wrap this up, or legislators will, by creating some alternate process by which titles can be established and claims reconciled. It will be messy, time consuming, and expensive, and it will delay still further the day when we can all be confident that the housing market has bottomed. The US legal system is slow to deal with emerging crises, and the solutions it crafts generally satisfy no one. But for all that, they usually work tolerably well.

Fannie and Freddie in a Mess, by Megan McArdle, The Atlantic, October 14, 2010

Yep. The uncertainty of the status of real estate titles won’t hurt only the folks losing their homes through foreclosure:

Already, it’s apparently impossible to sell a foreclosure–and people who have bought foreclosed homes are starting to sweat, wondering if they’re going to get embroiled in a lawsuit. But what about short sales? Again, if a company doesn’t have the authority to foreclose, it doesn’t have the authority to authorize you to sell it for less than the value of the mortgage. Things seem cleaner with ordinary sales, but what if some other company comes out of the woodwork to claim that the note wasn’t properly registered, and you paid the wrong guy? Does the lien go back on the house? Who owes the money?

This is why people are worried that the title-insurance system will break down.

Who Suffers From the Foreclosure Mess? Just About Everyone, by Megan McArdle, The Atlantic, October 15, 2010

And this could get ugly:

Josh Rosner, who heads the research firm Graham Fisher, presents new proof that banks knew they were selling bad loans. The following video is as discussion between Rosner and Elliot Spitzer about the smoking gun and what to do about it. It’s well worth a listen.