Too much money in politics or too much politics in money? 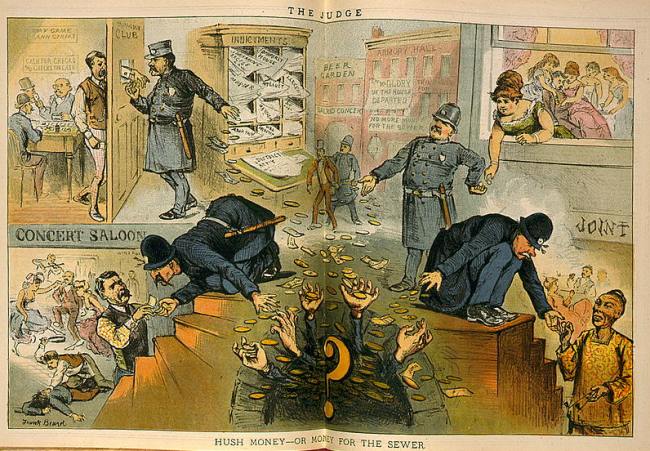 First, let me point out that congressional salaries already put members of Congress in the top 5%. So it’s not surprising to find that so many are well off financially. In fact, it’s been this way since the beginning of the 20th Century. Matt ,,, wrote a great post about a month ago on the history of congressional pay. In part this is because higher pay insulates members from corruption (at least the really bad kind: Teapot Dome Scandal, etc). A member is less likely to take a bribe if they are making 175k than 50k. Are members paid too much? You can decide that yourself. Just know that with decreased pay comes a higher risk of corruption.

But the more important point is that when averaged in constant dollars congressional pay hasn’t fluctuated all that much. So the notion that today this is somehow a much more relevant factor than usual would have to assume that today’s populist rhetoric plays an important role in Congress’s disapproval. That’s not out of the realm of possibility. However, is it the reason congressional approval is so low? Probably not. There are a multitude of other factors that have a more pressing influence such as gridlock, the success of the 111th Congress, and intra-Congress conflict (e.g. polarization, caustic political attacks, etc) (Durr, Gilmour, and Wolbrecht 1997, gated), the process of making legislation itself (Hibbing 2001, gated), and not to mention the performance of the economy overall. And since congressional approval has been both high and low despite members’ pay, it probably doesn’t have a huge effect.

Vermont Sen. Bernie Sanders is having a difficult time with his latest tweet assailing the wealthy.

First, Sanders, who ran a progressive presidential campaign criticizing Wall Street and the rich, tweeted out a message Thursday evening with what seems to be a typo, telling billionaires: “You can have it all.”

After deleting the initial tweet and replacing it with a new one, swapping “can” with “can’t”, Sanders was mercilessly mocked for questioning how yachts and cars billionaires need when he and his wife bought their third house — a $600,000 beachfront residence — in August.

Greta: Sanders a hypocrite or just have a great accountant?

While the senator has long been critical of the top 1%, Sanders allegedly dropped some $600,000 on a beach house in 2016 in Vermont’s Lake Champlain Islands. Additionally, the senator attracted some controversy over several of his other purchases, including a jacket that prompted Newsweek to shoot out a headline stating “Socialist Bernie Sanders wears a $700 jacket while complaining about rich people.”
. . .
Sanders and his wife Jane reportedly have a 30-year mortgage of $50,000-$100,000 for a condo in Washington, D.C., according to Politico. And, in 2014, Sanders and his wife allegedly gave some $8,350 to charity, according to CBS.

For a table showing congressional pay since 1789, see our “Pay and Perquisites of Members of Congress, Including A History of House and Senate Salaries.”