On Christmas Day, 1776, George Washington led the Continental army across the Delaware River to attack the Hessian mercenaries at Trenton. 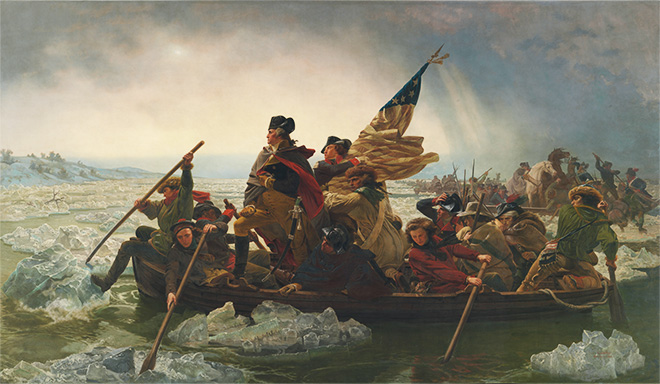 Washington Crossing the Delaware by Emanuel Leutze, 1851 (The Metropolitan Museum of Art)

Washington’s plan was to cross the river at night, march to the nearby town of Trenton, New Jersey, and attack the Hessian garrison right before dawn. Time was Washington’s greatest enemy; to combat it his orders called for the various regiments to assemble at their designated crossing points no later than sunset. The close proximity to the crossing points allowed the soldiers to begin the journey immediately after nightfall struck and complete the crossing no later than midnight. Once across, Washington intended for the armies to reassemble and march approximately ten miles to Trenton, arriving there no later than five o’clock in the morning to achieve surprise. Despite his meticulous planning, the schedule failed almost before it even began.
. . .
The freezing and tired Continental Army assembled on the Jersey shore without any major debacles. Once ready, Washington led his army on the road to Trenton. It was there that he secured the Continental Army’s first major military victory of the war. Without the determination, resiliency, and leadership exhibited by Washington while crossing the Delaware River the victory at Trenton would not have been possible.

Crossing of the Delaware

The Crisis, by Thomas Paine

THESE are the times that try men’s souls. The summer soldier and the sunshine patriot will, in this crisis, shrink from the service of their country; but he that stands by it now, deserves the love and thanks of man and woman. Tyranny, like hell, is not easily conquered; yet we have this consolation with us, that the harder the conflict, the more glorious the triumph. What we obtain too cheap, we esteem too lightly: it is dearness only that gives every thing its value. Heaven knows how to put a proper price upon its goods; and it would be strange indeed if so celestial an article as FREEDOM should not be highly rated. Britain, with an army to enforce her tyranny, has declared that she has a right (not only to TAX) but “to BIND us in ALL CASES WHATSOEVER” and if being bound in that manner, is not slavery, then is there not such a thing as slavery upon earth. Even the expression is impious; for so unlimited a power can belong only to God.
. . .
‘Tis surprising to see how rapidly a panic will sometimes run through a country. All nations and ages have been subject to them.

For a free Pocket Constitution, see our web site. We also have available a free copy of Thos. Paines “Common Sense” pamphlet.