Established by the Congressional Budget and Impoundment Act of 1974, the budget process refers to the steps necessary for adoption of a concurrent resolution on the budget, thereby creating the framework for consideration of appropriations bills and authorizing legislation.

The Joint Select Committee on Budget and Appropriations Process Reform is an effort to repair the current system discussed here.

The Congressional Budget Process. The Congressional Budget Office, which provides nonpartisan budgetary analysis to the House and Senate Budget Committees, is required to publish its report of the economic and budget outlook by February 15. The Budget Committees use this report’s baseline budgetary projections as a benchmark from which to build the budget resolution and measure proposed policy changes. Working closely with authorizing and appropriations committees, the Budget Committees then mark up and report out budget resolutions that reflect the priorities of each chamber. Differences are then resolved between the two chambers. 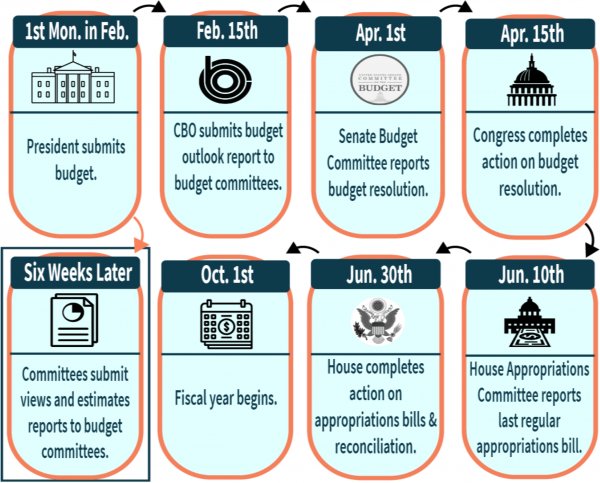 The Budget Resolution. The budget resolution addresses the entire federal budget, including: mandatory spending, discretionary spending, revenue levels, and debt levels. The budget resolution provides an overarching vision for the future and a comprehensive plan for addressing the government’s fiscal challenges. It provides Congress with enforceable targets for the subsequent consideration of appropriations and authorizing bills. It also contains various budgetary rules and limits for the purpose of enforcement. Current law requires the budget resolution to cover at least five fiscal years; however, since fiscal year 2012, it has covered 10 fiscal years.

Deadlines. The Budget Act sets out a number of deadlines within the budget process (see chart). Since there are no consequences for inaction, Congress frequently misses these statutory deadlines.

From the House Budget Committee.

Funding the Government: The Budget Process and Omnibus Spending Bills [Article I Initiative]

Congress enacted legislation in 1985 to strengthen its then-11-year-old budget process (Congressional Budget and Impoundment Control Act of 1974) with the goal of balancing the federal budget by fiscal year 1991. The law, called the Balanced Budget and Emergency Deficit Control Act but commonly known as Gramm-Rudman-Hollings for its congressional sponsors, was amended in 1987 so the federal budget would be balanced by 1993. The law established annual maximum deficit targets and mandated automatic across-the-board cuts (“sequestration“) if the deficit goals were not achieved through regular and appropriations action (See also Sequestration.)

The Gramm-Rudman-Hollings law also established an accelerated timetable for presidential submission of budgets and for congressional approval of budget resolutions and reconciliation bills, two mechanism created by the Congressional Budget and Impoundment Control Act of 1974. Budget resolutions, due by April 15 annually, set guidelines for congressional action on spending and tax measures. The resolutions are adopted by the House and Senate but are not signed by the president and do not have the force of law. Reconciliation bills, due by June 15, actually make changes in existing law to meet budget resolution goals.

In 2011 Congress passed the Budget Control Act of 2011, which, among other things, increased the debt limit and created the Congressional Joint Select Committee on Deficit Reduction.