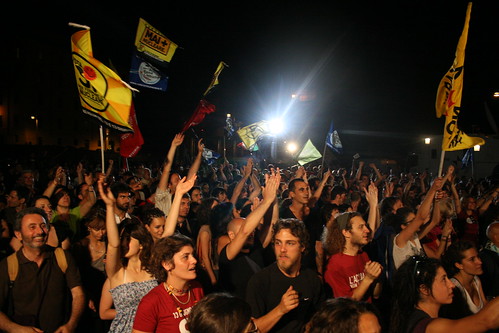 Quorum, n. A sufficient number of members of a deliberative body to have their own way and their own way of having it. In the United States Senate a quorum consists of the Chairman of the Committee on Finance and a messenger from the White House; in the House of Representatives, of the Speaker and the Devil.

The minimum number of members whose presence is necessary for the transaction of business. In the Senate and House, it is a majority of the membership. U.S. Constitution, Article. I. Section. 5. Both chambers usually assume a quorum is present even if it is not. If a point of order is made that a quorum is not present, the only business that is in order is either a motion to adjourn or a motion to direct the sergeant-at-arms to request the attendance of the absentees.

The number of senators that must be present for the Senate to do business. The Constitution (Article. I. Section. 5.) requires a majority of senators (51) for a quorum. Often, fewer senators are actually present on the floor, but the Senate presumes that a quorum is present unless the contrary is shown by a roll call vote or quorum call.

A quorum in the House of Representatives is when a majority of the Members are present. When there are no vacancies in the membership, a quorum is 218. When one or more seats are vacant, because of deaths or resignations, the quorum is reduced accordingly. Because of Members’ other duties, a quorum often is not present on the House floor. But any Member may insist that a quorum must participate in any vote that takes place in the House. If a Member makes a point of order that a quorum is not present, and the Speaker agrees, a series of bells ring on the House side of the Capitol and in the House office buildings to alert Members to come to the chamber and record their presence. A quorum is 100 in the Committee of the Whole House.

Individual committees set their own quorum requirements to conduct a hearing. However, House rules require that not fewer than two members be present. Senate committees usually allow a single senator to be present to conduct a hearing. Individual House committee rules also set a quorum requirement for waiving a hearing notice, but House rules disallow the quorum from being less than one-third. Senate committees have no comparable rule. Finally, for House committees, a majority of members of a committee constitutes a quorum for authorizing a subpoena or closing a committee session. Most congressional committees allow ex officio members to be counted toward establishing a quorum.